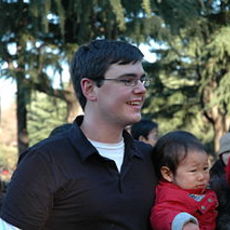 I am Matt from "Where the Hell is Matt?" AMA

It was a sticky issue that I agonized over for months as I watched the news in Syria get worse and worse. I filmed those clips back in July of 2010, about 6 months before the Arab Spring.

At the time, the dancers were fine with appearing in the video. When things turned bad, I was unsure whether contacting them would put them in jeopardy, and I couldn't find any other way to reach out to them.

In the end, I decided to use the footage but keep them thoroughly blurred for their safety.

I made the decision not to cut the footage out, because it spoke so directly to what the video is about for me.

To be clear, it's not a matter of religious conservatism. As I understand it, Syria is relatively liberal about things like men and women dancing together. It's more of a political issue. Their government is just killing people willly nilly at this point.

Those were meido cafe girls. My host in Tokyo was taking me around the city and he asked me what I wanted to do.

I said show me something uniquely Tokyo-ish.

He asked if I wanted to go to a Meido coffee shop.

He said, "It's a cafe with girls who dress up like french maids."

"And they play board games with you."

"That's it. Just talking and board games."

I said, "Okay, you better take me there immediately."

So we went and it was exactly what he said. We played a Pirates of the Caribbean board game where you had to stick a sword in a barrel and avoid making Jack Sparrow pop out. If you won, you got a piece of chocolate. If you lost, you had to wear silly kitten ears.

Our meido girl asked me what I do. My host, Daisuke, explained, "He is...famous American dancer."

The girl paused and step back. She covered her mouth with her hand, then screamed, "YOUUUUUTUUUUUUBA!"

So all the other girls came around and they all had autograph books and I asked if they wanted to dance with me and they did and it's in the video. The End.

The thing is, you hear about the noisy stuff.

Ever heard the expression "man bites dog?" I won't explain it here, but it's that. It's sort of a general misunderstanding about the way media works and what it's for.

The media isn't actually designed to give you an accurate picture of what the world is like. It's just telling you when shit is going down. It's exactly like a nervous system. Your body doesn't tell you about the parts that aren't hurting.

What I've found is really going on right now is this: the world is less violent, more open, and more healthy than it's ever been in the history of civilization. Our brains just aren't designed to see things that way.

So when I spend a couple years making a video with thousands of people in it, a number of them are bound to have passed away by the time it comes out. Last night I heard from the mother of a 20 year old who danced with me in Fayetteville, North Carolina in a shot that I ended up cutting from the video. He was killed in a motorcycle accident about a week after we danced and that footage is most likely the last that exists of him.

That is pretty hard to deal with.

I got hauled off to the police station in Athens for dancing in front of the Parthenon. A nearby defender of Greece's cultural heritage demanded that I delete the footage from my camera. I refused. It escalated.

Whenever you hear about someone going into North Korea, they tend to make it seem like a big deal -- like they outsmarted someone in snuck in under barbed wire.

I can't comment on their experiences, but for me it was absurdly simple and not a big deal. I paid Koryo Tours, which is a North Korean tour company out of Beijing, then I went out to Beijing, met up with my group, and we all hopped on a plane to Pyongyang just like any tour group that goes any place else.

Don't get me wrong. North Korea is super-weird, but it's not like they won't let anyone in. They would LOVE as many tourist dollars as you're willing to give them. That's true of just about everywhere, by the way.

I timed my visit during Kim Jon Il's birthday -- what turned out to be his last birthday, actually.

They have these mass dances where they bring thousands of people out into the street in fancy dress to do these kinda silly, childish dances together.

I looked over at the Brit guide who was with our group. He knew why I was there and what I wanted to do and he just kinda mouthed the word, "Go."

So I ran out into the group of North Korean dancers, opened my tripod and plopped the camera down, and just started doing their dance.

The North Koreans immediately broke out in stitches. They thought it was hysterical, and their laughter kind of short circuited the security apparatus. All the guards just stood there not knowing what to do, cause everyone was staring at me and laughing and I'm going to go out on a limb and say I don't think that happens very often.

So I knew as long as I kept dancing, we were sort of at a stalemate, but I didn't have a shot unless I could get someone to dance with me. So I kept going and then finally this one woman stepped out of the group, bowed in front of me, and joined in.

Anyway, we were shut down and I was put on the bus, but it blew over pretty quickly and no one cared about going after my footage or anything. It was ultimately no big deal.

At least for me. I hope she's okay.

I was on a flight to Tokyo to shoot a Visa commercial and I got to talking to the guy in the seat in front of me. He was incredibly friendly -- he actually made my whole row switch seats so that my partner, Melissa, and I could sit next to each other.

That was a weird flight. Like I said, incredibly nice guy.

Also, he carries all his clarinets with him in the overhead.

I think it's annoying when you have to pretend to find something funny because if you don't, people will think you're upset about it.

The main thing that got my back up is this: Where was she? She was holding the camera.

We were flattered to be spoofed. I just wish it had been more clever.