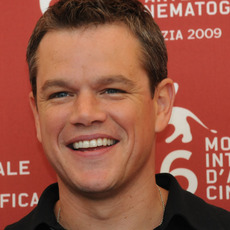 About
is an American actor, voice actor, screenwriter, producer, and philanthropist whose career was launched following the success of the drama film Good Will Hunting (1997) from a screenplay he co-wrote with friend and actor Ben Affleck.
Reddit AMA Stats
Tag Cloud
voice-actor, actor, philanthropist, producer, screenwriter

I am Matt Damon, Ask Me Anything!

Thank you. Good Will Hunting obviously is the most influential movie in my life, and in Ben's life, and bringing it to the screen kind of dominated our 20s. It took 5 years to get it from the time we started to the time it came out, it took 5 years. So I would love to write another script with Ben; I love Ben, I love his work, he's been my buddy for 35 years. The big issue is time for us. We have a company together so we work on a lot of projects together, but to try to carve out the time is really tough. I mean we both have a whole mess of kids now, and these other days jobs. He's directing all the time and I'm off working with these other directors. The thing about Good Will Hunting is that we were unemployed and we weren't writing the script on a deadline either. Nobody was expecting it, so we were just these two idiots in our basement writing this thing, and now we have all of these pressures of the lives grownups have. So I would never say never because I would absolutely love to write with Ben again, and I'd love to collaborate with him on anything, he's brilliant. I'd love to be in one of his movies that he directs. The problem there is that he just keeps giving himself the best roles, so until he stops doing that and maybe just directs, none of us can really work with him.

That's a great question. The thing about acting is often time what happens is you end up being a jack of all trades and a master of none. So I've had to learn things for the Bourne films for instance, like being upside down underwater in a car which required me to learn. I went to a swimming pool in Berlin everyday after work and practiced being at the bottom with a scuba tank, getting my air taken away, and tying shoes and doing small menial activities without my air in order to be comfortable underwater so I could shoot that scene. I didn't walk away being certified as a scuba diver which would probably be a better use of my time, but I walked away being able to be in a car underwater and perform the scene I needed to performed, so it's an odd set of skills you end up learning. Though I did for the Bourne movies start boxing and I never did that before, I was 29 and I fell in love with doing it. I never did it as a sport. I wouldn't put me as a ring against anyone. I'm an excellent movie fighter, probably wouldn't be in a real fight.

Yeah, so that article was sent to me. I might be the first person for whom a trillion movie dollars was spent to rescue, so obviously that will be a milestone, and I am actively looking for projects that could cost people money trying to come get me. Thank you.

I think a big Reddit party would be the way to go.

Thank you! I was always kind of bewildered by Team America, I think because it's hard for us to understand what our images are in public, I think we're not good judges of that, and when I saw myself on screen just only able to say my own name and not really that well, I kind of wondered "Wow, is that how people perceive me?" At that point I just kind of was like, I'm a screenwriter and an actor, and like really? I can barely say my own name? So I was always bewildered by that, and I never talked to Trey and Matt about that. And Incidentally, I believe those two are geniuses, and I don't use that word lightly. I think they are absolute geniuses, and what they've done is awesome and I'm a big fan of theirs, but I never quite understood that one. But I will say this. Those of us who were parodied in that video were parodied because we were against the Iraq war, and we went on the record against that war, and so history is on my side not theirs.

First of all, why does your costume look like it cost more then mine in the martian? That's an awesome costume and I agree you do. I'm glad that I make halloween easier for you. Working with Robin almost defies description. He was one of the most generous, loving, wonderful people I've ever met. He had this capacity that I've never seen on a movie set. When everyone started to get tired and started to flag a little bit, he would launch into standup. We knew it was original because he was making fun of crew members and pulling them into these bits. It was like 15 minutes of the best stand-up ever that was just privately for us. Everyone would laugh and laugh and laugh and then everybody would get this boost of energy and go back to work. I'll never be able to thank him enough for what he gave us. In my heart, that's where he is, as this person that I'm deeply deeply grateful came into my life and changed it for the better.

That's a good question and I don't think there's a uniform answer. Now at this point of my career it's usually less about the script and more about who the director is, but in the case of a movie like The Martian I read the script and I thought it was incredible, but I also thought it was really risky because for my portion of the movie it was just going to be me up there, and when Drew Goddard who wrote the script backed out of directing it because he got another job there was no director attached, and so I just walked away from the script. I just said it's too risky, I wouldn't let just anybody did this. And then when Ridley Scott said that he liked it, the decision took me all half a second. So the script is obviously important, but it's more so about the director.

The ingredients of my ideal taco, oh my god. Fantastic question. My ideal taco is actually the taco I'm not supposed to have which is the taco we have on taco night at my house. It's the crunchy corn shell with the good meat, just ground beef in there. It's all about the layering. The meats gotta be hot, and the cheese goes on first so that it melts. And then you're gonna get in there with a little bit of tomato and lettuce but not too much cause it's not a salad, it's a taco, and then you're gonna throw some avocado on top and some sour cream and then a bunch of cholula. I don't know if you know what cholula hot sauce is but it's the best. Throw a bunch of cholula on there, maybe squeeze some lime on top, and go to town.

He just did one literally last week. I got these giant fruit baskets in the mail from Tina Fey and Amy Poehler. They had just made jokes at everyone's expense at the Golden Globes that were really funny. George made up stationary with my name on it, and sent a really wounded letter to Tina and Amy saying my feelings were really hurt, how could they do this, etc. So they sent two fruit baskets. One had a letter with an apology. Another said “If this is part of some Clooney prank, please know that we’re grown-ass comedians, and you have to do a little better to fool us.” So I photographed the letters and emailed them to George with a caption that said “Go fuck yourself.” He’s honestly a child. I can just see his shoulders shaking when he laughs alone in his house.

I think the best thing a director can do is create an environment, a really open and free environment, and I have to say that I worked with some of the best directors on the planet, and they all do it differently, but the one quality that they all share is that the great ones all create a really highly collaborative environment where it's basically a battlefield of ideas. The ego is completely checked at the door, so they don't show up with this is the way it's going to go. I mean director is kind of the wrong word for what they're doing. They don't say I'm directing you to do this and this is the only way it's going to go. They show up with an idea that is their best idea, and then they're open to everybody else's idea and then they're willing to instantly jettison their own idea if faced with a better one. So they're essentially the arbiter of taste, but they create an environment where everyone feels free to lob ideas at them, and that's how people start iterating on each other's ideas and that's collaboration, the best ideas emerges.

It's been interesting to me over 20 years to look at these master directors, the people who would be commonly perceived as master directors and realize they're allegiance is to what they're making and not their own ego.

I thought it was brilliant! I mean, I never understood it, and then I heard an interview with them and they said the puppet came in looking kind of mentally deficient and they didn’t have time to change it, so they just made me someone who could really only say his own name. All the comedy they’re doing is really next-level stuff. Also, I liked being included as a person who was against the Iraq war.