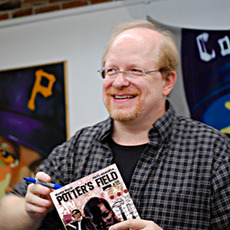 About
is comic book writer. He is well known for his eight-year run as writer of the DC Comics' title The Flash, as well as his scripting of the limited series Kingdom Come and Superman: Birthright, and his work on Marvel Comics
Reddit AMA Stats
Tag Cloud
comic-book, comic

I am Mark Waid, writer of comics such as Superman and Daredevil, and creator of Thrillbent.com.

I'm not going anywhere for a bit. I could see another year or two at least, maybe more. As far as other Marvel characters to reboot...Silver Surfer someday? Maybe? No plans and no TIME right now, but it's an interesting thought....

2- Short answer? His powers are as much a shortcoming as they are an advantage.

3- Batman. Never written a Batman story. Would LOVE to do the ultimate Riddler faceoff.

4- I wish I could, but it hurts. IT HURRRRTS. All I can tell you is, imagine Superman: Birthright #13.

You are a RIOT. I'd accept it for no other reason than the offer would mean that my parka-manufacturing division would be making a real killing in Hell.

It'll never happen. And it would depend on who I answered to and what the job was defined to be.

Five questions, five answers: 1-a great comic book story takes advantage of the medium. It remembers to be visual at all times, even during the "talky bits." The words/dialogue are a useful buttress to the story, giving depth and additional meaning, but it still should tell a visual story!

I did, once. Sat down with him at a convention hotel lobby when I was a fan, early 1980s. Charming as all hell, gracious, and the absolute model pros should look to when talking with their readers. Utterly accessible.

You know what? I've become less and less of a fan of that approach over the years. No offense, but I much prefer at this point either trying to embellish the creator's original intent or just creating something from scratch.

This is my favorite question of the day. Thank you.

He's the strongest man in the world, and he can fly, and nothing can hurt him, and what makes him awesome is that he spends all his time saving people.