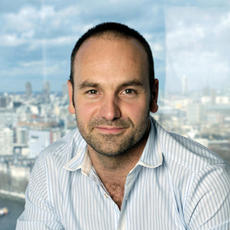 Hi, I'm Mark Shuttleworth, founder of Ubuntu & Canonical. Currently in the midst of a record-breaking crowdfunding campaign to make Ubuntu Edge superphone a reality. Ask me anything.

Yes, the specifications will be released as soon as they are final. Love the 3D printing movement, be great to get an accessory-printing meme flowing!

This first version of the Edge is to prove the concept of crowdsourcing ideas for innovation, backed by crowdfunding. If it gets greenlighted, then I think we'll have an annual process by which the previous generation backers get to vote on the spec for the next generation of Edge.

So in this first generation Edge, no, we didn't look for open hardware specifically. We can choose silicon with more open drivers as we finalise the spec, but again I think the priority for the CPU / GPU will be performance to hit the goal of convergence.

In future generations, it would be great to see if we can do an all-open device, for example.

Thank you - appreciate your saying hi!

Software is covered by our existing efforts to bring Ubuntu to mobile, nothing more needed there. The crowdfunding is really what it costs to bring a device to market, it would be more if we were a major brand, $32m is pretty lean I'm told. Hope the actual cost doesn't exceed it or I'll be carrying that baby but hey it's worth the risk.

We're entering a really interesting phase where in a sense our very own tools spy on us.

We will certainly have an easier time providing transparency on the origin of the code in the platform than, say, your average android device, where it's all a big hacky mush. The core OS which will be updated regularly on the Ubuntu phones is all traceable directly back to standard Ubuntu source and binary packages.

There will be a core piece on each phone which handles the hardware, consisting of kernel and drivers and firmware and interfaces to things like the radio. That's where unhealthy things could creep in from manufacturers and carriers. We can offer... constructive guidance there.

Yeah, we could add some perks for folks showing support - good idea, thank you!

Its an interesting question. We've done drop-test simulations and we have tried to shape the internal structure to manage this, and think it's going to be OK, but that's the point of pushing the limits, right?

We're hoping to blaze a trail with silicon anode batteries. Hopefully, that is the only blaze involved - a trail ;)

And in closing - Reddit is a pretty fantastic resource for discourse and discovery, thanks for keeping it that way. Takes lots of work to preserve what's great about a society while not stagnating, keep it up.

We've done thermal modelling of the device (recognising that the processor options are still only guidance from the vendors). I think for this generation we want to go all-out for performance to get over the convergence hump - i.e. deliver a device that gives a good enough desktop experience when you hook it up via HDMI and a bluetooth keyboard.

But we are doing a lot of work on cooling off while you are not actually using it docked, so it doesn't warm up your pocket when you're not using it as a desktop!