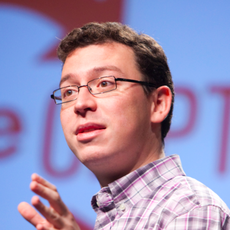 About
known as one of the pioneers of crowdsourcing. He is the founder of the company reCAPTCHA, which was sold to Google in 2009.
Reddit AMA Stats
Tag Cloud
entrepreneur, programmer, associate-professor

IAmA scientist and startup CEO named Luis von Ahn. I developed CAPTCHA and reCAPTCHA, those squiggly characters you see all over the web (sorry!). I'm now working on Duolingo, a new way to learn languages while helping to translate the Web. AMA.

I am Luis von Ahn, the creator of reCAPTCHA, those squiggly characters all over the web, and the co-founder and CEO of DUOLINGO! Duolingo has become the most popular way to learn languages online, for free, and has overtaken expensive and gimmicky...

I see what you did there.

By pissing off the user!

Because they don't motivate you to keep going! We spend a lot of effort making Duolingo addictive -- we think the hardest part about learning anything on your own is motivation.

OVERLOOKS (you only have to type one correctly!)