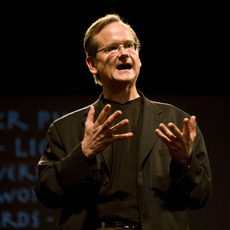 About
is an American academic and political activist. He is a proponent of reduced legal restrictions on copyright, trademark, and radio frequency spectrum, particularly in technology applications.
Reddit AMA Stats
Tag Cloud
political-activist

I am Lawrence Lessig, activist and law prof at Harvard, here to talk about McCutcheon vs FEC -- the case SCOTUS heard this week that could end contribution limits to candidates. AMA.

Lawrence Lessig and Jack Abramoff here — we both know (maybe different things) about the problem of money in politics. Ask us anything!

We are Larry Lessig (presidential candidate, maybe) and Jimmy Wales (founder of Wikipedia). We’re lighting up the Internet to fix democracy first. Ask us anything!

If you want to support Bernie (and I love Bernie too) then get Bernie to run a campaign that gives him a chance of achieving real reform. His current campaign does not do that. It rallies the base. It makes us angry. It will turn out the vote. It could well mean he wins. But does it leave us with a democracy capable of fixing its most fundamental problems? It doesn't. Not the way he's fighting it. Not by a mile. I love him. But I hate the idea of yet another reformer boxed out of the possibility of actually fixing anything. Remember Obama. He spoke as often and as passionately about the need to fix the system. Then he did nothing. Because his campaign too didn't have the courage to fight the campaign in a way that gave them a shot at fixing the system. We cannot make this mistake again.

Awareness is the gasoline. Spread it broadly, and a tiny spark can ignite change. (Hey, not so bad for on the fly...) And look at states where a similar change was made: Activists in Connecticut spent years pushing that issue, spreading awareness. And when the governor was convicted for corruption, change happened.

Oh please don't out me on this. Ok, but DON'T TELL ANYONE I SAID THIS: They are lawmakers. Why aren't they paid as much as a first year partner at a DC firm? In Singapore, gov't ministers get paid $1 million a year. Where is corruption in Singapore. NO-where.

Thanks for the followup. I think Bernie can win. I think his campaign is in the direction of winning. But I believe unless he builds the expectation that reform happens first, none of the other things will happen either.

It takes a different kind of campaign to build that expectation. It needs one that says, "look, we have to fix this corruption first, and that's what I'm going to do." Because if he's not committed to that, then what will happen is what happened with Obama: they'll get to DC, they'll look at the list of issues they campaigned on, they'll pick the one that's most popular first, and reform will never be that one.

You might think we can get by just find with things as they are. If you do, then my argument should mean nothing to you. But if you believe reform is necessary, it cannot be one issue among 8. If it is, it will never be the one that wins.

GREAT QUESTION because it surfaces a confusion that is rife within this field. The problem (imho) is not the money. The problem is the fundraising. I don't care if the Koch brothers or Soros spend their money to promote one candidate or another. I care about members of Congress spending 30%-70% of their time raising money from .05% of us. Change the way we fund elections and you change the corruption. We won't utopia, of course, but we will have a gov't "free," as my buddy, Buddy Roemer put it, "free to lead."

I fear the NN fight shows precisely why the corruption fight is so crucial. The cable/telecoms can afford the long game. And will always win the long game so long as an FEC commissioner seat is just a stepping stone to some multi-million $ industry contract. Why doesn't the president pick people who commit not to go lobby for the industry they're going to regulate?

There isn't a deep principle here. There's a practical read of the current political situation. I was critical of what Nader did — not in running, but in not withdrawing. Those principles in this context (e.g., the potential war with Iran) would lead me to fight for this cause in a different way.

I am more hopeful. People get it more clearly, and they really want it fixed. You just need to give them hope.

Look at what happened today: We did NO promotion of the Mayday PAC. A website, a blog entry, a tweet — and people flocked to the issue because it is important to them, and they're frustrated that politicians ignore it.