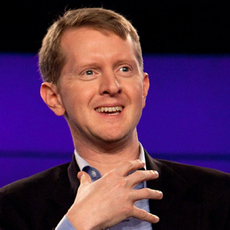 About
noted for holding the record for the longest winning streak on the U.S. syndicated game show Jeopardy! and as being the all-time leading money winner on American game shows
Reddit AMA Stats
Tag Cloud
author, game-show

Ken Jennings from Jeopardy! here, wearing out my welcome. AMA!

IAmA 74-time Jeopardy! champion, Ken Jennings. I will not be answering in the form of a question.

I am Jeopardy!'s Ken Jennings. My new book Because I Said So! was written with the help of Redditors so thanks! AMA baby.

I am Ken Jennings. I was on Jeopardy! for six months a very long time ago. My new book about comedy is called PLANET FUNNY. AMA!

I did this for my son's ninth-grade bar trivia team last month. (This bar does trivia in the all-ages area, apparently.) They were tired of perpetually losing and brought me in as a ringer.

I tried to warn my son that we might not win just because I was there...but then we ended up winning by a huge margin, so I think he probably learned several terrible life lessons.

In medieval times, this was exactly the theory. The church and nobles would let the peasants have their yearly "feast of fools" or whatever, because they knew they would work more happily afterward. "Wine barrels burst from time to time if we do not open them and let in some air," the Paris School of Theology wrote. Let's let the workers have their little satire, so they don't actually revolt.

It's easier, of course, to fire off a snarky tweet or share an EPIC JOHN OLIVER TAKEDOWN than it is to actually donate or march or call your Congressperson. And there's a 2006 study of Daily Show viewers that found that when Jon Stewart made fun of media and government, he wasn't making his viewers outraged... he was actually making them more cynical and less likely to take part in the democratic process.

tl/dr: Satire is great but it has some down sides when it's our only mode of engaging with current events.

As I opened my mouth, I realized "Waaaait a second there is no way the Jeopardy answer here is 'What's a hoe.'" But it was too late.

At some point, I think my Jeopardy run will be entirely forgotten except for this one answer. I will run for president in 2032 as the "What's a hoe?" guy and it will be my "Where's the beef?"

We need to get that rumor started. I'd say there's virtually no chance, since they would probably interview people WITH ACTUAL TV HOSTING EXPERIENCE.

But that said, what a dream job. I would take it in a heartbeat. Trebek works on-set like 4-5 days a month, and I'm sure a big Sony truck full of cash backs up to his house once or twice a week. I just need to work on my French pronunciation and my transparently false sympathy at wrong answers.

Lots of people think it's a Jeopardy reference, but actually I was thinking of that time Watson and I were cellmates in prison, and it kept raping me.

Ha, my son is 10 and he wants to watch Jeopardy EVERY NIGHT NOW. I always beg him to turn it off. It's my favorite show but nowadays when I hear the music and the smooth Canadian tones of Alex Trebek I find myself getting all nervous and keyed-up. Like I'm back in 'Nam all of the sudden.

My book actually has a section about how the joke-riffing in Reddit comments sections is often surprisingly funny.

But this joke made me change my mind.

Bruce Vilanch is hiding under my desk right now. Unfortunately he's not writing jokes for me, if you know what I mean.

When my little sister was born, I was super-excited...not to hold or take care of the baby, but because we were now a five-person family. The perfect size for Family Feud!

We never made it on White Family Feud but I still hope that Black Family Feud will welcome us with open arms someday.