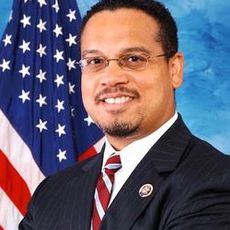 I am Keith Ellison, U.S. Representative from Minnesota and First Muslim Member of Congress. AMA

Please call my Mpls office. I have a staffer name Mike who is great with veteran and military issues. sorry i can't quite quote chapter and verse on how to fix the problem, but Mike can. 612-522-1212

no. no personal problems.

Colbert is a cut-up, isn't he? It was really fun doing the "Better Know a District". Before we started, Colbert leaned into me and said "I'm about to become a very different guy". He was right. Real fun.

no, i feel that my family and i have been treated with respect and fairness. i know many people who have reported unfair treatment, and disrespectful treatment, but that has not been my experience. also, in cases where there has been bigoted or hateful treatment, interfaith groups have stepped forward. for example. when Terry Jones protested in Dearborn to incite against the Muslim community there, a multitude of people of all faiths stood and said "no." so, thanks for asking and please go out and build interfaith understanding

Thanks for the question. Things have changed a lot since i began serving in Congress. We're out of Iraq, which is one of the issues I campaigned on. We have a Health Care law that will offer great benefits to people. When I started, it was only a hope. We went thru a massive financial collapse, and then passed major reform. When I started in Congress, I never dreamed GM and Chrysler would fail. not only did they fail, the American people picked them back up, and now both are hiring and thriving. When I entered Congress, Obama was an IL state legislator. Now he's President. Also, perhaps most threatening, Citizens United became the law of the land, and it's perverting our politics in a way none of us have ever seen before. So, many changes have occurred. At the end of the day, one thing remains the same: for working Americans to have a better quality of life, we have to organize, come together, and call for a new politics of inclusion and generosity.

Yes, we need to get money out of politics. Let's do a Constitutional Amendment to overturn Citizen United. And also, let's publicly fund campaigns. In the meantime, let's pass Disclose Act; so, at least we know who's messin' with our elections. I really admire those Move to Amend guys. Sure, I will be happy to hang with the people on the plaza again.

Most of my colleagues, D and R, are extremely respectful and kind. Some knuckleheads tho.

Yes, debt reduction is very important. The real issue is how to address it. In the short term, it's more important to get people working. I prefer a major public works program, especially given that we have trillions in unmet infrastructure needs for schools, bridges, power grids, and transmission lines. But we have a long term debt problem, and it will take a combination of spending cuts and new revenue to fix it. Dramatic cuts now would cause the loss of public sector workers which increases unemployment. Four features of any sensible debt reduction: invest in jobs to get more taxpayers to help shrink the debt, increase revenue by closing loopholes and asking the most well-to-do to do a little more, defense must share in the cuts, and finally protect social security, medicare, and medicaid. Check out deal4all at CPC.grijalva.house.gov

organize. our superior numbers can overcome their superior dollars.