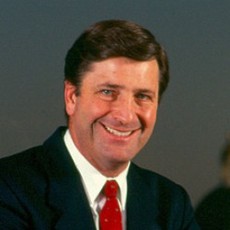 Because too many people think prisons will solve our social and criminal problems, when in fact an expenditure on education and jobs is a far better solution.

It should not be sacrosanct. There is a lot of Pentagon spending that is wasteful and unnecessary. Every dollar we spend on unnecessary equipment, on fighting the war in Afghanistan, on maintaining bases where they aren’t necessary, is a dollar we can’t invest in job creation or in paying down the deficit.

Here's a curious example of Pentagon spending; As you know, IEDs are a major source of death and injury in Iraq and Afghanistan. So, the military decided that they need to develop a way to find IEDs. They set about to create an artificial dog's nose. After spending $22 million, they had not yet succeeded. I asked them, "Why don't you just get a dog?" The General answered, "Dogs get tired." I said, "Get two dogs."

We need to have a laserlike focus on Al Qaeda, and I don’t see how a large scale military presence in Afghanistan, essentially taking sides in their civil war, is keeping America safe. I’ve been asking the tough questions that need to be asked on the Armed Services Committee and will continue to do so. During the vote two weeks ago on the horrible Republican spending bill, I voted against most amendments that boosted funding for military equipment. It’s a start.

As for Wall Street, let’s be blunt. The most exploitative bankers have powerful allies, and there is a lot of secrecy in the big board rooms of America. It can be hard to distinguish between those who were simply wrong and those who actively profiteered knowing they were setting our economy up for a tailspin. This is further evidence of the need to remove corporate money from politics. Campaign finance reform should be a priority for all Americans who want transparency in government and on Wall Street.

No corporation or government should determine who has access to the Internet or control the flow of information. This is an economic imperative too. We’re already falling behind countries like South Korea and Japan when it comes to broadband penetration and speed. Job creation depends on innovation and innovation increasingly depends on bandwidth.

We keep a tally of every phone call, letter, and e-mail from constituents. When they are reaching out to us about legislation I am undecided on, I keep a very close eye on the sentiment of the district. Constituent outreach is especially important to us when it comes to signing onto letters or cosponsoring bills. Every year there are thousands of bills and letters circulated in the House, and it’s just not practical for me to closely follow every single one. I’m much more likely to sign onto a bill or letter if my staff tells me there has been a lot of constituent interest.

Thank you for the question. It’s a good one. I believe I vote consistently with my principles. Obviously there are some political interests who align with me more than others, and that will be somewhat reflected in whom they choose to support. And like everyone, there are personal opinions about individuals that I sometimes keep to myself for the sake of congeniality and relationships.

So the answer to your question is I honestly don’t think I “owe” any group my allegiance. I’ve been in public policy enough that I doubt there’s a single group left in America that has given me a 100% report card every year I’ve been in office.

Ultimately, public policy is about choices and compromise. When I’m on the House floor, after all the debate is done, after all the deals have been struck, I’m left with a choice: Yes or No. This means I’ve voted for bills that had elements I didn’t like (I was disappointed the public option wasn’t in the Patient’s Bill of Rights for example) and voted against bills that had some good policy (I voted against tax cuts for millionaires and billionaires even though the bill contained an important extension of assistance for people looking for work). It’s clichéd at this point, but we shouldn’t let the perfect be the enemy of the good.

One of my staff is addicted to Reddit, and he keeps me up to date with all the profound and logical arguments found on these pages. I've trained him not to share the foolish ones with me. But he does from time to time bring a hillarious piece forward.

Good question. Over the past 40 years, through effective lobbying. We have seen a major shift in this country's distribution of wealth, The wealthiest Americans’ share of the economic pie has ballooned at the expense of working and middle class Americans. For example, the top 0.1 percent of Americans have seen their slice of the economic pie grow from 2.7 percent to 12.3 percent of income since the 1970s while the middle class has seen virtually no improvement. Income for the top 1 percent has increased from around 8 percent to more than 18 percent. One more: in 1965, the average CEO of a large corporation in America made 24 times the earnings of their workers. By 2007, average CEO salary was rising close to 300 times the average worker's salary. This is all in Jacob Hacker's Winner Takes All Politics, a book I highly recommend.

I don’t think the media does a good enough job highlighting the real struggles of Americans who just can’t make it in America.

There is economic class warfare in this country, and the rich are winning. That’s just a fact, and it should be reported as such.

Net Neutrality is the non-discrimination of Internet content by Internet Service Providers (ISP).

This Supreme Court decision will go down as one of the worst in American history. It creates a fundamental threat to our democracy by allowing unregulated secret campaign contributions in any amount. I find it hypocritical that throughout the past two decades, the Republican Party's stated policy on campaign finance reform was full and immediate disclosure of contributors. With the Supreme Court decision, they switched their policy and opposed every bill that would require disclosure (see: The DISCLOSE Act).