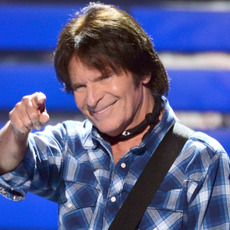 I am John Fogerty - singer, songwriter, and former leader of Creedence Clearwater Revival. My new album came out yesterday. AMA.

Came to trial in 1988. This is a complicated story and I'll try to explain it even tho it gets weirder when I try to type it. I really don't think the case had merit. For instance, when my album Centerfield first came out, I heard a rumor that Fantasy was going to sue me, but at first they were talking about the song Green River. Later they changed their mind to Run Through the Jungle. Seemed they were searching to find something they owned that sounded similar to The Old Man Down the Road. Obviously I finally ended up in a courtroom where I sang a little of both songs and showed how my style on the guitar evolved, making many of the things I do sound similar musically Every artist in the world actually spends a lifetime hoping he will find "a style." That is a style. A musical style. If you're lucky enough to find one, it means you are instantly recognizable to the listener. Byt he way, the case was, I believe, really clear when Fantasy's musical expert played a computerized version of each song with a series of beeps coming out of the speaker. He explained that if the songs were the same, you would only hear one note at the song. If you heard two beeps at the same time, the melodies weren't the same. As we've now come to learn in our internet world where you click the button and there it goes, the man in the courtroom clicked the button. Three notes - same melody. Rest of the way was 2 beeps. I chuckled to myself cause the man had blown his own case. Proved the songs were not similar, but uniquely different. I didn't argue the case in front of the Supreme Court. There was argued my right to get my attorneys fees back. Wasn't built in uniquely in cases like this. The deck was really stacked against me and all songwriters. Fact that they made that ruling is very important for songwriters from now on. Vote was 11-0.

My starting point is actually in the second verse. It's an age old struggle and unfortunately it's still with us. Something that probably bothers me more about life in this world and anything else is wealthy, privileged, spoiled rich people have so much power. All you have to do is look at Wall Street and some of the firms, big names on Wall Street, and trace some of the members of those firms directly to the White House. You realize "oh my god, they're running things, no matter which party gets elected." This REALLY pisses me off. I hope someday because of the iternet and fact that we can all be so connected, we are able to put a stop to that and have the common man running things. After all, there are so many more of us.

Tone - wow. You spend a lifetime thinking about tone, worrying about tone. I realize here I am probably being a guitar geek and so I may have a selective audience who even worries about this part. I was very lucky back in the day things were still analog, not digital. I formed my values early on from the correct realm. I'm sure you've all heard other artists rant about how digital sucks the life and tone out of their music, and in some ways that's true. I grew up loving the great tone of people like Duane Eddy, Bo Diddley, Chet Atkins, Lowman Pauling from the group The Five Royals. Give yourself a treat - go look up the Five Royals and play these three songs - Think, Don't Let it Be in Vain, and most notably Slummer the Slum. You will have trouble sleeping until you figure those out. Basically, my answer about tone is the simpler, the better. I love to plug in a great guitar, which already sounds good, into a great amp. A handwired point-to-point amp. Vintage "snob, boutique" amps you can get nowadays. Summing it up - first time I picked up a Les Paul custom guitar in Albany, CA, plugged it in to a Fender Blackface Amp (A twin? maybe a deluxe) in 1969, I think February.. I tuned the guitar down to D, kind of like in Proud Mary and Bad Moon Rising. I played one E chord which came out as a D chord. I believe I was on the bridge pickup. The sound that came out was the opening chord of Midnight Special. Even to this day, when I play that chord live in front of an audience, I always take a moment to revel in how great that sounds. The red seas have parted.

Getting to Woodstock was an experience I'll never forget. As we got closer and closer in a helicopter from the holiday inn where we were staying, you could see cars parked on the highways abandoned for miles. Long skinny parking lots. Everyone left their cars and walked. Ive never seen that again in my life. Once on the ground, I felt a sense of trepidation. I was kinda worried that someone might yell "fire!" in a locked club. I was afraid of the prospect of people stampeding or getting anxious about something. Happily nothing like that happened. Everyone had a great time and I followed the Grateful Dead, who put half a million people to sleep. It was my job to warm them up for Janis.

It was just a fun expression that I made up. It wasn't a real word but I wanted to have a word that sounded kind of like "rockin," "shufflin," "boogie," kind of rock n roll.

I have no thoughts about being a politician. It's a thankless job. It seems the only really truthful politicians are done in pretty quickly by their cohorts, the other politicians. It seems to be reelected you have to lie to someone so you will look good to everybody and find yourself agreeing with the largest group of voters. I believe you end up losing yourself because there is so much insincerity. That said, I still go to the polls and vote because that's our privilege, our right and our duty, and I'm perennially disappointed.

Hey Mr. Berger. I was really pissed off the first time I heard it, too! I think my reaction was "Oh my God, they turned my song into pants!" Here's the funny part about all of this. Back in the times I was raised, I didn't want my musical stars to be pitchmen selling products. Especially guys with a conscience - Bob Dylan, Bruce Springsteen... you get the picture. Those guys, myself included, got lots of airplay on the radio. It seemed tawdry to be going after even more money by making commercials. So, here we are in the new millenium. It's much harder for people of my generation, including myself, to get that sort of radio airplay. It's a fact of life, the way the music industry has changed. Some actually believe that the straightest line to getting airplay is to make some sort of commercial with your song in it. Therefore, the new millenium of this brave new world, I have a much more tolerant idea about such things. Oh my god, call me a hypocrite, but I feel the day may come that I will willingly have a commercial with my song in it. By the way, so far, those songs you've heard in commercials have not happened willingly on my part. Stay tuned...

Hmmm. Well in the case of Proud Mary, the song kind of just landed on me. Sometimes it feels that way, as if you had just tuned a radio station in your mind correctly and some music comes through very clearly. Proud Mary was written directly after I had just been honorably discharged from the Army in 1968. It was sitting on the steps to my little apartment and was a surprise when I opened the envelope. I was so happy, at the height of Vietnam, that I turned a cartwheel on the lawn and went inside and 50 minutes later I had written Proud Mary. Boy was I happy. You may call that a real life experience but not sure what it had to do with a river and a boat.

Down on the Corner, believe it or not, was kind of inspired by seeing an advertisement in the paper one day. It was an ad from Disney that said in great big letters "Winnie the Poo." Something in my brain said "Winnie the Poo and the Poo Boys." Obviously that was close to "Willy and the Poor Boys." As I began to develop this idea it turned into music in that weird mystical almost uncontrollable way music comes to songwriters. Winnie the Poo is still my favorite character who I've shared with my daughter Kelsy since the day she was born, tho she's growing out of it. But I'm not.

Hi there, I'm very sorry to hear about your dad. I have loved music my whole life and have been amazed at the healing power of music. I want to thank your family including your father for listening to my music. I would say that it was my idea to have my son play with me on the road. Shane is an amazing guitar player!