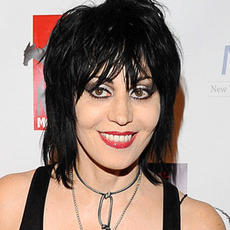 Joan Jett. Ask Me Anything.

Well you know I've been in that place too where you worry about what everybody thinks of you, am I popular, do people care, are they looking at me, all that stuff. That's a drag, man. Having to worry about fitting in, am I cool enough to ANYTHING.

You gotta not care about what people think in general about you. I'm not talking about bad stuff, if you're a nasty person, because I don't consider myself a mean person, I consider that I know what i want and I'm tough. But I'm very emotional and un-tough on a lot of levels, I cry very easily, I'm sensitive and I don't think that's a bad thing.

A lot of people would say "well that's not a bad reputation. you sound like a pussy" and I would say yea. but I am passionate about music and being taken seriously about my music, so if you're going to mess with that, we have a problem.

A lot of "Bad Reputation" came from comments that people said in the early days of "she'll never make it, she has a bad reputation" it was probably said at one point. Inspiration comes from all sorts of places. And you have to decide that it's not worth all that mental anguish worrying about what other people think.

Just be yourself and everything will fall in line, the way it's supposed to be. If you're yourself, that's the best thing you can do, because you can never go "damn if I'd only been myself." Live an authentic life and you don't have to worry about your reputation.

That's great, that is really awesome. You should send the report to Blackheart, I would love to see it. Famous Pennsylvanian, that is so funny that she picked me. My dad would be proud of that.

When people tell you this to your face, it means SO MUCH. If we were face to face, I bet you would tell me what hard times I got you through. And it's really quite varied, and it really makes me take what music does for people seriously. If I'm that conduit, I'm honored.

And she really played guitar too! Which helped. So I could discuss how I play the guitar, how I hold the guitar, the way I stand. A lot of things I didn't realize I was doing until I saw her onscreen and realized oh my god I do that stuff. She noticed that, and picked up on it before I ever would have. Little things that people don't notice, but I guess if you're a good actor you do.

I do think she did a good job. I think she was extremely dedicated to it, chopped all her hair off and really immersed herself in everything she could find about the Runaways and I helped her find some things, told her some things that I had never told anybody ever, not even for the book, how you function in life or what I was thinking at the time to give her insight into myself and my family. All of the actors did the best that they could with what they had, and it's a great story and it should be told. For me as the artist, you always wish that they would choose something more substantial than showing a tiff. But beyond that I thought they did a really good job.

Well before I was in a band, I wanted to be everything from a vet, an astronaut, an archeologist was a big one. It could be very wide-ranging because I had a lot of different interests including music so I'm very happy where I wound up.

That's some of the greatest music, and there are many fans and music and people who want to be in bands just like you.

I was so shy when I started in The Runaways - I mean, painfully shy. I was a shoegazer. I could not sing unless the lights were off in the studio. I could not bear to let them watch me emote, I was not there yet. But I will tell you, the more you work at it, the more it goes away. I'm still fairly a shy person in general, but when I get onstage I get comfortable. That didn't come right away, it took a lot of time, and I'm lucky enough that I've been able to have a long career to work on that.

As far as you being in a band, you can never be sure, but if you really want to be in a band and you really believe it, keep trying. Put ads online, I don't know where you put ads these days, people still read their local free newspapers and a lot of musicians advertise in those, but I would try every route to hook up with other people who have like interests that you do that want to do the same type of music.

If you don't give it a shot, you will always regret it, especially since you spent so much money on gear. You owe it to yourself to try.

You don't. You never know. That's the sad thing about it, is that you don't know. And you certainly don't know when you quickly meet somebody. But even as you know somebody longer, it's really hard to know. Obviously you go on your gut feeling but that can be wrong too. ANd it's terrible to have to be wary about people, because it is not my nature, but I've been burned a few times and you just have to careful.

Well I think what shaped my life was definitely my parents and the way they brought me up early. I think this is one of them; bless my mother, she's passed away. When I was about four years old, I got a rabbit muff for Christmas from one of my mother's best friends. You put your hands in it, it's like a handwarmer for little girls, and I was a little tomboy and i hated it. I threw it on the ground and said "Id on't like this" and my mother hauled off and slapped me across the face and said "HOW DARE YOU TALK TO POLLY LIKE THAT. YOU APOLOGIZE RIGHT NOW. YOU NEVER HURT SOMEONE LIKE THAT" and I was horrified. And I think something like that shapes your life. It didn't hurt but it humiliated me. It showed me what a dick I was being and as a little girl, i got it. and to this day, I will do my best to not be mean to people. And my mother was not a violent purpose, it was more of a statement, a lot of noise to scare the shit out of you. And I think that's important you know? To set some kind of boundary for kids not being a jerk, because kids learn early from their parents. So that is one of them, but my parents took us to a lot of places, we went out and saw a lot of museums, Smithsonian Institute when we lived in Maryland and went to Washington, we would always do a lot of things and did not always sit in front of the TV. Every time I see the World's Fair stuff in NY, I remember being there with me and my brother in Queens.