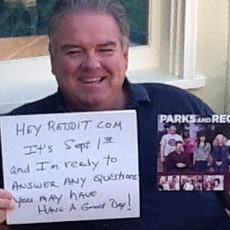 I am Jim O' Heir, veteran actor and "Jerry" on Parks & Recreation. Hit me with your best shot.

The "giggles" are a daily occurrence. We just keep going at it until we get it right. We shoot one episode in five days and on the rare occasion we have to make up a scene that we couldn't get to.

Now as far as the velocity of a swallow goes...here are my thought:

In order to maintain airspeed velocity, a swallow needs to beat its wings forty-three times every second, right? Actually, wrong. By comparing the European Swallow with bird species of similar body mass, we can estimate that the swallow beats its wings 18 times a second with an amplitude of 18 cm:

If we ignore body mass and look only at bird species with a similar wingspan, we can estimate an average frequency of 14 beats per second and an amplitude of 23 cm:

Skip a bit, Brother Last month’s article on The Strouhal Number in Cruising Flight showed how simplified flight waveforms that graph amplitude versus wavelength can be useful for visualizing the Strouhal ratio (fA/U), a dimensionless parameter that tends to fall in the range of 0.2–0.4 during efficient cruising flight.

For a European Swallow flying with our estimated wingbeat amplitude of 24 cm, the predicted pattern of cruising flight ranges from a Strouhal number (St) of 0.2:

If we settle on an intermediate Strouhal value of 0.3:

You know, we are who we are. I'm a big guy and always have been. It leads to some obvious comic situations that I would find funny whether it were me or someone else playing the part. As far as being self-conscious...I guess I'd have to say at times yes. We all have certain insecurities to deal with but the folks at P&R always have my best interest at heart.

That's a really great question. To be perfectly honest...I think my agents would HATE it. I've worked steady as a big guy and they do get 10% of everything so I can't imagine they would want to mess around with what's been working.

As far as messing up my career. So hard to say. I have seen it happen where someone has done a major body change and couldn't find work. A great example is the guy who played Newman on Seinfeld. He lost a ton of weight and had trouble getting work. He's put the weight back on and is now a series regular on a TV Land show.

Yes. Amy really is that funny. But, more importantly, Amy is one of the kindest people you could ever meet. She's the heart of the show and has a BRILLIANT comic mind.

Thanks for the nice words about the show. Sorry for the inaccuracies. We do try our best but I know what you mean.

Nick and Ron are similar in that they're both really manly men. We joke that Nick can grow the Ron mustache in an afternoon. Nick is also an artist with woodworking. So is Ron.

I think every actor brings a bit of themselves to every role so I can't say that any of us are super close to our characters but there's some similarities.

Out of this world experience.

That's a very funny concept. I might pass that along.

We definitely do some add libbing but I have to tell you that the writing is so strong on the show that we usually stick to the script. Also, we do what we call a "fun run" after we finish every scene and that's where we get to try whatever we want. Can't begin to tell you how much fun that is.

As far as Aubrey goes I will let her know. lol