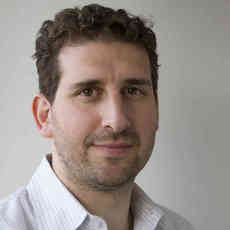 About
Jesse Eisinger is an American journalist, currently a financial reporter for ProPublica. He and colleague Jake Bernstein won the Pulitzer Prize for National Reporting in 2011 citing "their exposure of questionable practices on Wall Street that contributed to the nation's economic meltdown, using digital tools to help explain the complex subject to lay readers." Eisinger also played a key role in uncovering the accounting scandal at Lernout & Hauspie; in August 2000 he published an article in The Wall Street Journal detailing that firms use fictitious Korean transactions to hide losses.
Reddit AMA Stats
Tag Cloud
journalist, financial-reporter

We’re ProPublica Reporters Justin Elliott and Jesse Eisinger. Ask Us Anything About Our Investigation Into the Red Cross’ Disaster Relief Failures

I’m Jesse Eisinger, a Pulitzer-winning financial reporter. AMA about why only one person is in jail for the financial crisis.

This is Jesse. It's worth noting that KBR, which used to be a unit of Halliburton, was just charged by the SEC with trying to write overly restrictive confidentiality agreements that could have discouraged whistleblowing:

There's a great story on this and I highly recommend it. The writer is really handsome, too: http://www.propublica.org/article/the-rise-of-corporate-impunity

It's great that you are using this to teach students. I think we need more example's like Tony's to help keep institutions ethical.

Bitcoin is a mad, technoutopian fever dream that will end in tears, if it hasn't already.

Well, financial reporters got it pretty good. The worst that happens to us most of the time is that high-priced PR people yell at us on the phone. Once, in the late 1990s, two detectives from the Manhattan D.A.'s office were sicced on me by someone about a story I wrote on a Canadian billionaire pharmaceutical fraudster. I was so naive, I thought they were coming to feed me some information about their investigation of the guy. I didn't realize they were questioning ME until halfway through our meeting. Another time, my boss at the WSJ and current boss at ProPublica was summoned when he was on his honeymoon in Paris by Bernard Arnault, the French billionaire who owns LVMH, to complain about some of my columns. My columns stood up to the scrutiny and my boss backed me. I was deeply sorry my boss had to talk about accounting arcana on his honeymoon but very glad that I had pissed off Arnault that much.

I don't think enough attention has been paid to the fact that the white collar laws are inadequate, so there haven't been many proposed remedies. One thing the DoJ should use is the "willful blindness" or "conscious disregard" charge. As Judge Jed Rakoff wrote recently in the New York Review of Books: Such a charge "is a well-established basis on which federal prosecutors have asked juries to infer intent, including in cases involving complexities, such as accounting rules, at least as esoteric as those involved in the events leading up to the financial crisis. And while some federal courts have occasionally expressed qualifications about the use of the willful blindness approach to prove intent, the Supreme Court has consistently approved it."

I believe the financial crisis was caused not by fraud but recklessness, stupidity, exploitation of legal loopholes and inadequate regulation. That doesn't mean that crimes weren't committed. I believe there were many crimes -- and in fact, I've never spoken to a prosecutor or former prosecutor who did not agree. they simply say that they themselves didn't see any.

First, take them seriously and give them respect. Frankly, they are often off target. But everyone deserves to be listened to. Then it's a matter of carefully trying to confirm the things they are saying. You have to tell them it's in their own interest for the story to be accurate and fair; for that, you need to carefully get the other side, gather all the facts and not shy away from the things that may not be entirely flattering about the whistleblower.

I have made so many mistakes, I've given speeches about them. Fortunately, I've never made the kind of huge factual error that meant the story required retraction. Thank God.

One of my best stories was also one of my biggest mistakes. In Oct 2007, I wrote for Conde Nast Portfolio that the Wall Street investment banks were going to fail. I wrote that it would be Bear Stearns first, then Lehman Bros, and maybe even Merrill, Morgan Stanley and even Goldman. Pretty good, right? But I didn't follow up on it, probe deeper, write more. So I kind of blew the opportunity of a lifetime to really own the story of the biggest financial crisis since the Great Depression. Oh well.

A change in the culture of the DoJ, where the leaders were more ambitious, were less afraid to fail and devoted more resources to the most complex cases. Also, the DoJ needs to start thinking about statutory fixes to address its loss of tools over the last decade.