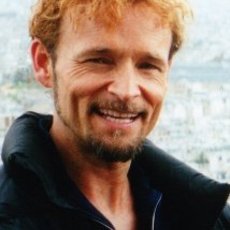 I'm Jerry Rees, Director of "The Brave Little Toaster" - ask me anything.

Here's a shot of the voice of Blanky, Timothy E Day. A natural actor! http://imgur.com/5d300

Surrounded by creative people who all felt the blend of joy and tragedy that bonds our life experiences...

Okay, the flower. Here's the way it went.

There's the night in the thicket. Poor Blanky gets full of stickers and everyone is just cranky. Arguments all around, and the Radio drawing his own "zone" of privacy in the dirt that no one shall cross! And Blanky is feeling like the insecurity blanket even more than usual. He crawls to Lampy seeking snuggles. But Lampy calls him a fuzzball and tells him to get his own place to sleep. Blanky finally tries to snuggle with Toaster. But even the long-suffering, warm Toster is in no mood to cuddle with Blanky and pushes him away. Blanky is left all alone. Vulnerable and unprotected.

Next day in the meadow, there is mayhem. But amidst the mayhem is the flower. The flower is painted exactly the same yellow as Blanky, by the way. Like Blanky, it tries to snuggle with Toaster - the difference being that it sees its own reflection and falls in love with the "other" flower. There is no way Toaster can possibly help the flower. After trying to reason with it, then pushing it away, Toaster retreats, then peers back to see the vulnerable lonely flower wilt. Toaster is at a loss, there was no way to help...

The very next moment, Toaster sees Blanky being pulled down a hole by a bunch of mice. Immediately Toaster jumps to protect the vulnerable Blanky. Last night, Toaster had pushed him away. But now Toaster comes to the rescue - protecting it.

When Lampy teases Blanky, Toaster step up to protect him again.

Blanky returns the kindness by making himself into a tent for the group to use as shelter.

Later, Lampy has noticed that Toaster is being nice to Blanky and asks why.

Toaster does her best to explain. But underneath it all, seeing the vulnerable little yellow flower wilt when she shoved it away has made her feel like never shoving vulnerable little yellow Blanky away again. To keep Blanky safe. To keep Blanky from "wilting". In the case of the flower, there was no way to help. In the case of the blanket, there is.

This use of two vulnerable characters - both painted the identical color - both seeking cuddles - both being pushed away - one wilting emotionally - one wilting literally - was an emotional path of change for the Toaster.

Well, I figured that these characters, as charming as they were, were dealing with an ominous world. Their fear of being obsolete rings true for all of us at one time or another as well. I asked our voice actors to keep the characters believing their world - never playing it for laughs. And David Newman, in writing the score, tapped into an inherent sadness in being abandoned and seeking reunion. I think all of us making the film took the attitude of being the characters rather than just observing the characters. If you ARE an old car headed for the crusher, that's some dark business! Anyway, the ultimate survival, after the adventure, gives the proper exhale... I think Wilhite in particular was really excited that we were taking chances.

I had that whole connection with inanimate objects as characters while we were making the film. I was walking through a back alley to get to a restaurant and came across a broken TV that was tossed out. I felt sorry so sorry for it! Wondered how it felt? How long it had faithfully given entertainment to its owner...

We screened Toaster at the Sundance Film Festival. Several judges told me that behind closed doors it had been considered the best film that year. But they were afraid that no one would take the festival seriously if they awarded top prize to a "cartoon". But they wanted me to know how much it was secretly admired. I said "Thanks. I guess..." Then the Disney Channel (which had bought the rights for cable) purposely moved their air dates forward so as to kill our theatrical release. Skouras, an art house film distributor had stepped forward to release us in theaters. They would play to college and young adult crowds in evening shows only - no matinee. They really "got" the film. But the channel insisted on putting it on the air before Skouras could get us in theaters. Even though a theatrical release would have made cable and home video more valuable. I met my lawyer at Sundance that year. He had seen the film and asked if I could use any assistance. I said "yes! Our theatrical release is getting touched." He tried to help out. Said it was as unusual a situation as it seemed. Really weird. But he tried. Great guy by the way, and still my lawyer, Peter Nichols.

So all of us who made The Brave Little Toaster watched the theatrical release we had been waiting for dissolve. It was as if we were sinking in the swamp with the characters. And no Elmo to snatch us out at the last minute! We all hurt for a long time.

Then as time went by, there was this magic - we started seeing the characters here and there. In kids' drawings on walls. In schools and in offices. We realized that an audience was beginning to discover our story and connect with our characters. Big smiles all around!!!

And holy cow, what a shock - a wonderful shock - to have college and post-college aged young people approach now with fond memories of the film all these years later. It is a gift from you all that is deep. Tonight is part of that. Thanks to you all...

At least the Air Conditioner got repaired by Rob later on. Freon tears of joy :-)

Well thank you! The whole Toaster crew really cared about the project and put tons of effort and creativity into it. But the real joy is discovering years later that the audience found an emotional connection with it. That's what it's all about :)

I recall how Walt Disney used to show no fear - in Snow White, the Queen drinking the potion and turning into the Witch with the room spinning wildly. Snow White herself falling into a coma. Pinocchio watching Lampwick transform into a donkey was INTENSE! And Pinocchio himself drowned, face down. Fables have always been a way to move through our darkest fears to a place of hope. Notice that Air Conditioner finally gets repaired by Rob, who has grown tall enough to touch him - the very moment Air Conditioner has been waiting for :-)