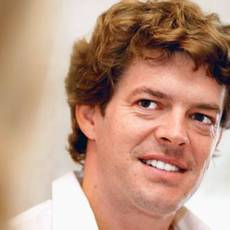 About
is an American film producer. Blum is the founder and CEO of Blumhouse Productions, made especially for producing horror films.
Reddit AMA Stats
Tag Cloud
film-producer, horror

I am Jason Blum, producer of Paranormal Activity, The Purge and Insidious: Chapter2.

My first job was selling cable TV door to door. It was a commission only job and it was some of the best training I had to becoming a producer. My job after that was as a real estate agent in NY - also great training. The first film I produced was Noah Baumbach's "Kicking and Screaming" - he was my roommate in college.

My first job was for a company in NY called Arrow Entertainment. I met Arrow because they were going to finance "Kicking and Screaming" Ultimately they decided not to, but they thought I was a good salesman so they hired me.

I'll tell you a funny story about contacts. My family knew Steve Martin. I sent Steve Martin the script of "Kicking and Screaming." I did not know Steve Martin, but he read it and he called me. When he called, the phone was shaking in my hand because I was so nervous. I was 22 at the time. He said that he liked the script and he offered to invest a little bit of money in the movie. I asked if he could send me a letter saying how much he liked the script, which he very generously agreed to do. I ripped the cover page of the script off, put the letter from Steve Martin on the script and I sent it to every movie company that existed. And that's how I got "Kicking and Screaming" financed.

Without giving too much away, all of us fell in love with the red faced demon and we went about making the sequel to answer a lot of the questions posed in the first movie. I wish we had done this more in the early Paranormal Activity movies so we did it a LOT in Insidious Chapter 2. There is a ton of crossover between Insidious and Insidious 2 - think Back to the Future 2.

I love all kinds of movies, including horror movies. But one of the reasons I mainly produce horror now is that I really enjoy making low-budget movies with total creative freedom and having a big audience watch them. It's harder to make an action movie or a period drama really inexpensively. And if you make the movies more expensively you necessarily give up a lot of creative control.

That scene scares the hell out of me too.

Rose Byrne is a great actress to work with. She was on the fence about doing the sequel for a long time but Leigh's script finally got her to say yes.

Unlike traditional Hollywood movies, we rarely have more than one writer and often times the writer is the director or co-writes the script.

Also, unlike Hollywood movies, the director's have complete creative control and they choose the visual artists and concept designers. Some movies have them, some movies don't.

Generally, as a rule I do not. But I have seen 1 ghost in my life. I was living in the basement of a storefront apartment on Crosby St. in NYC. I believe the exact address was 37. In the middle of the night at the foot of my bed a figure appeared holding someone else in his arms. Now I know everyone will think I was dreaming, but I was not. I know for certain I was not and the next day, I moved from the basement to the ground level so I never slept there again.

As a side not, I might also add, and this is true, we caught large rats in this apartment. It was when I was a real estate agent. Three of us shared the apartment and my share of the rent was $300.

Very important question. I'm on a 5-2 diet right now that means that I'm allowed to eat pizza 5 days a week and then I fast for 2 days. Pizza happens to be one of my favorite foods and my favorite topping (which you can't get in most places) is actually pesto. And my favorite pizza is in New York on 8th Avenue and 32nd Street right by Penn Station. I also like Artichoke Pizza also in NY.

I think we've already done it! Insidious is James and Leigh's own creepypasta!

We are developing a sequel to The Purge. I think the first movie only touches on James DeMonaco's great, high concept idea. I think there are a lot more stories to tell in the world where the Purge exists and hopefully we'll come up with something good.

Sorry about the names on Paranormal Activity, we'll try to do better next time.