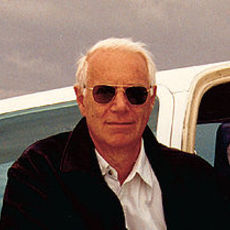 Hi, I am Jac Holzman, Founder of Elektra Records and the lucky guy who signed The Doors.

After the completion of Morrison Hotel, Jim and I went to a Mexican restaurant near the Elektra studios in Los Angeles. Jim ordered a vodka, and a tall vodka - an entire glass. I ordered the smallest beer and Jim turned to me and said: "C'mon! Have another drink. Come out where I am, on the edge." Knowing that I could not keep up with Jim, I said: "the edge is where we all want to be, the trick is not to bleed."

When we went to New York to do the Ed Sullivan show, just before the taping we had dinner at a deli nearby. Just the band and me. When we came out of the deli, fans chased us into the Ed Sullivan Theater. I never have been chased by a fan base before, and it was fun.

Regarding Freddy Mercury, I didn't see the band that much because they were always traveling. But they remembered my birthday, and for many years after I left Elektra, until I was 65, they would send me a note signed by each member. They were decent people. They were always appreciative of what Elektra had done for them because they broke in America two months before they broke in Europe.

That's an inspired question. Rhinoceros had a modest success, but the reason I don't think it happened was that the band was put together by Elektra producer Paul Rothchild rather than coming together organically. They had some notoriety, but did not have a central heart.

Elektra was not just about bands. We were well known for our singer-songwriters, including Carly Simon, Harry Chapin, Judy Collins, Phil Ochs, David Ackles. I thought David was an extraordinary songwriter, but he really didn't want it enough. For some reason, I did not figure out until many years later where his passion lay. It was in the theater. I never should have done an album with David. (We did three.) I should have helped him create a theatrical show. I didn't get that at the time.

There are always things you hope for that do not work. And frequently it's because the artist does not want it badly enough and is not willing to do what it takes by way of travel and public appearances. Love is a perfect example--successful on records but nowhere near the acclaim they deserved.

Most rock 'n' roll groups go through cycles. Following a meteoric rise, there frequently comes a period when things don't go so well. Sometimes, this is caused by the artist themselves. The Doors were doing great until Miami. After Miami, virtually every one of their live performances was cancelled, and the band felt terrible. The solution was not to lick our wounds, but go into the studio and do something great. That something: Morrison Hotel.

Interesting question and one I've often thought about. When I last saw Jim, my strong feeling was that if he came back to America, The Doors might have a brief history, but he would probably not choose the rock and roll life again. He saw himself differently.

I'm not a fan of the Oliver Stone movie, but I respect where he was coming from. Imagine Oliver Stone is boots-deep in muddy Vietnam hearing the liberated music of The Doors and imagining sex, drugs, and rock'n'roll as it must have been in his imagination on a moon-dappled night in Santa Monica. I think the movie is a lot about his fantasy of what 1966 and 1967 in California was like.

The answer is NEVER. I am not a band's hall room monitor. I am their friend, and my job is to help them through the rough spots, not to let them go.

The Rolling Stones are pretty much playing the same repertoire they've been playing for years and it's a nostalgic experience to go see them. Bob Dylan once said "nostalgia is death." I think Jim would agree with him. The Doors' music demands attention. You must give yourself to it. That was the band's intention all along. The Doors are an acquired taste. You must meet them more than halfway.

I wasn't impressed. They were doing mostly blues, and not the songs for which they became so famous, but I was struck by Ray, especially. He played two keyboards as if his brain had been cleaved in two. I thought that was amazing and so I came back another night.