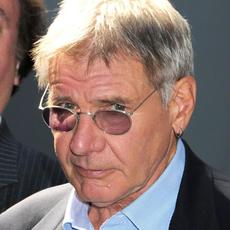 About
Harrison Ford is an American film actor and producer. He is famous for his performances as Han Solo in the original Star Wars trilogy and the title character of the Indiana Jones film series. Ford is also known for his roles as Rick Deckard in Blade Runner, John Book in Witness and Jack Ryan in Patriot Games and Clear and Present Danger. His career has spanned six decades and includes roles in several Hollywood blockbusters, including Apocalypse Now, Presumed Innocent, The Fugitive, Air Force One, and What Lies Beneath. At one point, four of the top six box-office hits of all time included one of his roles. Five of his films have been inducted into the National Film Registry.
Reddit AMA Stats
Tag Cloud
producer, actor

I am Harrison Harrison Ford. AMA.

The promoter would win.

Yes. There's millions of dollars buried in your basement.

Someone said thank you for being a part of so many childhood films: Well, thank you. I really appreciate that. It's a privilege to be able to be involved with people as talented as the people I've had the luck to work with, and it's just been a great experience for me, and I'm glad that so many of the films I've had the luck to do were films that could be enjoyed by families together.

Oh, let's see. On the first Indiana Jones movie, I tore an ACL in one of my knees, can't remember which knee, the scene in which I was fighting the big German mechanic on an airplane called a flying wing, I was run over by the landing gear and injured my knee, but I can't remember which one it was. Lots of bumps and injuries along the way.

Funny stories? We were shooting in Tunisia, and the script had a scene in which I fight a swordsman, an expert swordsman, it was meant to be the ultimate duel between sword and whip. And I was suffering from dysentery, really, found it inconvenient to be out of my trailer for more than 10 minutes at a time. We'd done a brief rehearsal of the scene the night before we were meant to shoot it, and both Steve and I realized it would take 2 or 3 days to shoot this. And it was the last thing we were meant to shoot in Tunisia before we left to shoot in England. And the scene before this in the film included a whip fight against 5 bad guys that were trying to kidnap Marian, so I thought it was a bit redundant. I was puzzling how to get out of this 3 days of shooting, so when I got to set I proposed to Steven that we just shoot the son a bitch and Steve said "I was thinking that as well." So he drew his sword, the poor guy was a wonderful British stuntman who had practiced his sword skills for months in order to do this job, and was quite surprised by the idea that we would dispatch him in 5 minutes. But he flourished his sword, I pulled out my gun and shot him, and then we went back to England.

I love that people are still curious about it.

I think that it's a wonderful storytelling mechanism for that question to be left unanswered.

I don't know and I don't care.

I was approached with the offer of a job, which at that point, was all I wanted to hear. I had helped George Lucas audition other actors for the principle parts, and with no expectation or indication that I might be considered for the part of Han, I was quite surprised when I was offered the part. My principle job at the time was carpentry, I had been under contract as an actor at Columbia and Universal. I had a house at the time I wanted to remodel, a bit of the wreck of a house. I'd invest money in tools but wouldn't have money for materials, so I realized this was another way of putting food on the table. And allowing me to pick and choose from the acting jobs that were being offered at the time.