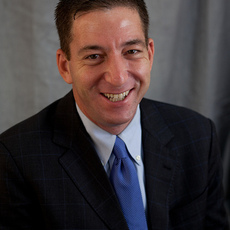 We are Glenn Greenwald & Murtaza Hussain, who just revealed the Muslim-American leaders spied on by the NSA & FBI. Ask Us Anything.

We're Glenn Greenwald and Janine Gibson of the Guardian US, and we’ve been breaking stories on the NSA Files since June. AUA!

I did a TED talk specifically to refute that inane argument, here:

How do you feel about the fact that the moderators of /r/worldnews have a policy of filtering any story from The Intercept as "Opinion"?

From the comments I've seen from the responsible moderators, the people doing this are partisan Democrats who want to conceal these stories because they perceive that it reflects poorly on Obama.

The reporting we have done has won the Pulitzer, the Polk, and basically every other news reporting prize in the west.

Only on Reddit are our stories deemed something other than "news".

EDIT: To be clear, my understanding of how this all works is that Reddit itself isn't doing the censoring, but rather the moderators who have been empowered.

The key tactic DC uses to make uncomfortable issues disappear is bipartisan consensus. When the leadership of both parties join together - as they so often do, despite the myths to the contrary - those issues disappear from mainstream public debate.

The most interesting political fact about the NSA controversy, to me, was how the divisions didn't break down at all on partisan lines. Huge amount of the support for our reporting came from the left, but a huge amount came from the right. When the first bill to ban the NSA domestic metadata program was introduced, it was tellingly sponsored by one of the most conservative Tea Party members (Justin Amash) and one of the most liberal (John Conyers).

The problem is that the leadership of both parties, as usual, are in full agreement: they love NSA mass surveillance. So that has blocked it from receiving more debate. That NSA program was ultimately saved by the unholy trinity of Obama, Nancy Pelosi and John Bohener, who worked together to defeat the Amash/Conyers bill.

The division over this issue (like so many other big ones, such as crony capitalism that owns the country) is much more "insider v. outsider" than "Dem v. GOP". But until there are leaders of one of the two parties willing to dissent on this issue, it will be hard to make it a big political issue.

That's why the Dem efforts to hand Hillary Clinton the nomination without contest are so depressing. She's the ultimate guardian of bipartisan status quo corruption, and no debate will happen if she's the nominee against some standard Romney/Bush-type GOP candidate. Some genuine dissenting force is crucial.

Canada, Sweden and North Dakota have pretty harsh winters, too. As does Boston.

For me personally, the most shocking revelation was the overall one that the explicit goal of the NSA and its allies is captured by the slogan "collect it all" - meaning they want to convert the internet into a place of limitless, mass surveillance, which is another way of saying they literally want to eliminate privacy in the digital age:

There is definitely more significant reporting to come. Our colleagues at the Intercept - Jeremy Scahill and Josh Begley - just last week reported one of the most significant stories yet on the NSA and GCHQ's 's hacking practices:

Here's a little insight into how digital age media works:

I learned of NPH's joke after I left the stage (he said it as we were walking off). I was going to tweet something about it and decided it was too petty and inconsequential even to tweet about - just some lame word-play Oscar joke from a guy who had just been running around onstage in his underwear moments before. So I forgot about it. My reaction was similar to Ed's, though I did think the joke was lame.

A couple hours later at a post-Oscar event, a BuzzFeed reporter saw me and asked me a bunch of questions about the film and the NSA reporting, one of which was about that "treason" joke. I laughed, said it was just a petty pun and I didn't want to make a big deal out of it, but then said I thought it was stupid and irresponsible to stand in front of a billion people and accuse someone of "treason" who hasn't even been charged with it, let alone convicted of it.

Knowing that would be the click-worthy comment, BuzzFeed highlighted that in a headline, making it seem like I had been on the warpath, enraged about this, convening a press conference to denounce this outrage. In fact, I was laughing about it the whole time when I said it, as the reporter noted. But all that gets washed away, and now I'm going to hear comments all day about how I'm a humorless scold who can't take a good joke, who gets furious about everything, etc. etc.

Nobody did anything wrong here, including BuzzFeed. But it's just a small anecdote illustrating how the imperatives of internet age media and need-for-click headlines can distort pretty much everything they touch.

Edward Snowden should not be forced to choose between living in Russia or spending decades in a cage inside a high-security American prison.

DC officials and journalists are being extremely deceitful when they say: 'if he thinks he did the right thing,he should come back and face trial and argue that."

Under the Espionage Act, Snowden would be barred even from raising a defense of justification. The courts would not allow it. So he'd be barred from raising the defense they keep saying he should come back and raise.

The goal of the US government is to threaten, bully and intimidate all whistleblowers - which is what explains the mistreatment and oppression of the heroic Chelsea Manning - because they think that climate of fear is crucial to deterring future whistleblowers.

As long as they embrace that tactic, it's hard to envision them letting Ed return to his country. But we as citizens should be much more interested in the question of why our government threatens and imprisons whistleblowers.

I think much has changed. The US Government hasn't restricted its own power, but it's unrealistic to expect them to do so.

There are now court cases possible challenging the legality of this surveillance - one federal court in the US and a British court just recently found this spying illegal.

Social media companies like Facebook and Apple are being forced by their users to install encryption and other technological means to prevent surveillance, which is a significant barrier.

Nations around the world (such as Brazil and Germany) are working together in unison to prevent US hegemony over the internet and to protect the privacy of their own citizens.

And, most of all, because people now realize the extent to which their privacy is being compromised, they can - and increasingly are - using encryption and anonymizers to protect their own privacy and physically prevent mass surveillance (see here: http://www.wired.com/2014/05/sandvine-report/).

All of these changes are very significant. And that's to say nothing of the change in consciousness around the world about how hundreds of millions of people think about these issues. The story has been, and continues to be, huge in many countries outside the US.

You should ask the US Government:

1) why are you putting whistleblowers in prison at record rates?

2) why did you revoke his passport when he was trying to transit through Russia, thus forcing him to stay there?

3) why do you put whistleblowers in the position of having to choose between asylum in another country or decades in prison?

What are the names of the two encryption chips redacted here?

This became the top-voted question only long after we both left, as a result of a Twitter campaign.

I answered every single question in order as it rose to the top. I came back to address this one because people alerted me it had become the top one.

Unfortunately, I can't speak for the Guardian because I wasn't involved in this redaction process and didn't work at all with this document. But as I understand it, though, both the NYT and ProPublica had and redacted the same information for the same reason.

There are hundreds of encryption standards compromised by the program the Guardian, NYT and PP all reported on. I have never seen any list of those standards and don't have it. If I did have it, I would publish it immediately. As a result, the reasoning went (as I understand it), publishing one or two examples would be unhelpful if not misleading as those are tiny fractions of the overall compromised standards.

To be clear: if encryption standards are compromised by the NSA, I do not think it's valid to conceal that on the ground that it will enable Terrorists or other Bad People to avoid using those standards. But as I understand it, that wasn't the rationale for the redactions; it was that publishing one or two would do not do any real good and could affirmatively create the misleading impression that other (unnamed) compromised standards are solid.

If I could inform the world about exactly which standards have been compromised by the NSA, I would.