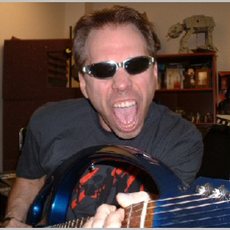 I am Frank Klepacki - Audio Director, Composer and Sound Designer for Petroglyph. Known for my soundtracks in the Command & Conquer First Decade, and a certain track named "Hell March." Currently working on End OF Nations!

Nope. sure didn't. I just thought it was a cool metal tune to have in the game. It blew me away when it got the resounding response it got, and the fact people still talk about it today is just amazing and I'm so grateful!

I remember having the most fun with Yuris Revenge (RA2 expnasion) and Firestorm (TS expansion). But also the original. That really felt new and special when we were working on it.

Working at Westwood was like a big family, great place to work and had a fun company culture, loved my time there.

No Joe didn't get the gig from a lottery, but he just sees it that way. You see, one day going into work, there was a deli next door, and Joe was sleeping right next to it, homeless, picking up scraps from whoever left the deli. One day the artists neeed a live male nude model to reference for 3d modeling. So they offered Joe a quick paying gig to nude model for a couple of hours so they could get all angles captured and translate it to the 3d tests. He just kept coming back and wouldn't leave, he kept offering to clean the office, the bathrooms, and they kept paying him because they felt bad. Then one day our receptionist went into labor unexpectedly in the lobby, and Joe without hesitation ran to help her and actually delivered her baby. We were in shock and he was the hero of the day. So then finally someone asked what his resume was, and sure enough we learned he was a former contestant on Star Search, which is a talent show that was popular in the 80's, but he lost his final round as a comedian and had struggled ever since, working odd jobs in truck stops and t-shirt wholesalers and the like. We hadn't considered the part of Kane yet, but they were shooting test footage the next day and Joe was helping set up the camera when it had come loose from the tripod and fell on his head. Cursing up a storm, he lunged it back on the tripod yelling at it for a good minute, and hit it a couple times before getting it out of his system and apologizing, cause he had kinda freaked us out with his outburst. What none of us realized is that the camera started rolling on the impact, and recorded the whole thing. This very footage was edited by the video crew, and used to show at the next game conference to build hype around C&C, and hence got him the role of Kane.

It was slowed down from actual speed.

Happy and flattered to have been an inspiration, thank you!

That is always the hardest question to answer! When you've written a thousand songs in your career, you can understand why that would be a little tough to narrow down, hehe. I have multiple favorites: Hell March (Red Alert), Got A Present For ya (Renegade), Divine Intervention (Universe At War), DogFight (Renagade), Zann Consortium Theme (Star Wars Forces OF Corruption), Prepare For Battle (Command & Conquer). I know there are others too. I would have to say Star Wars was my favorite to work on from a fan standpoint, as far as a completely original soundtrack goes, End Of Nations for sure. I think its some of my best work to date.

Thank you so much!

I really enjoyed my trip the Netherlands when I performed for Games In Concert there with the Metropole Orchestra.

Hehe, I heard that said somewhere, and though it was cool, so I recorded myself saying it and put it in the song. It was inspired by the idea of piloting a mech. ;)