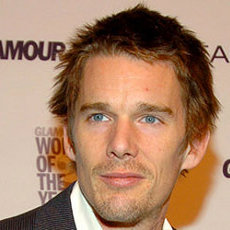 About
is an American actor, writer and director. Hawke made his big screen debut in the 1985 movie Explorers.
Reddit AMA Stats
Tag Cloud
writer, actor, director

We are Richard Linklater, Julie Delpy and Ethan Hawke - Ask Us (Almost) Anything

I am Ethan Hawke - AMAA

We are Ethan Hawke and Greg Ruth - Ask Us Anything!

Write every day. Not every other day. Not tomorrow. Not after the party. But before. The more you write, the more comes out of you. If you don't give inspiration an opportunity, it will never arrive.

I just need a few henchmen. Apply on Craigslist.

That's a funny question, and deserves to be answered. One does not shop for an island; I have friends in Nova Scotia, and often visited them, one of whom was an older woman who could no longer take care of her island, and she asked if I would buy it. A closet in Manhattan costs more than an island in Nova Scotia. So I answered yes. And I'm happy I did.

Hey, my pleasure, this has been fun! I've never done this before. It's such a relief not to have to answer questions on camera, and to have time to think about it. I always have a panic attack when I'm on one of those talk shows, and the cameras blaring in your face, and you have the pressure to be witty - it makes me want to crawl under a couch.

I own an 8 acre island off the coast of Nova Scotia; there are eagles, and seals, and raccoons, and pine trees for days. Believe it or not, land is actually quite affordable up there, and it's still rugged and un-gentrified. The people are straightforward and a pleasure to be around; I try to take my kids up there at least once a year. It's a place to disappear in the many times in my life when I've needed to.

I'm kind of obsessed with Nic Cage. I just found out about /r/onetruegod too. He's the only actor since Marlon Brando that's actually done anything new with the art of acting; he's successfully taken us away from an obsession with naturalism into a kind of presentation style of acting that I imagine was popular with the old troubadours. If I could erase his bottom half bad movies, and only keep his top half movies, he would blow everyone else out of the water. He's put a little too much water in his beer, but he is still one of the great actors of our time. And working with him was an absolute pleasure. In fact, one of my favorite scenes I've ever done is the last scene in LORD OF WAR.

GREAT question! As a child actor myself, I'm incredibly sensitive to this and kind of hate acting with kids for all the same concerns that are present in your question. But with a scary movie, it surprised me, because kids love to play. They love costumes, they love Halloween. The kids on-set treated the making of the movie as if we were all doing an elaborate haunted house; think about it, kids love to play Hide & Seek, they love to scare you and each other, and I was really relieved to see them all playing and laughing and understanding the spirit of a good ghost story. It really wasn't difficult for them at all.

1) What inspired me to become an actor? I saw Gary Sinise and John Malkovich do Sam Shepherd's play TRUE WEST on PBS when I was 13. And I can only describe the feeling as the way I hear people talk about Marlon Brando do STREETCAR; I felt like a door in my brain had been opened.

2) My first big acting gig was EXPLORERS; we have our own spaceship. And I auditioned for it on an absolute lark, and much to my parents' dismay, got the part. And did it turn out better than I thought? No... I thought it was going to be one of the greatest films of all time, you know, making ET look like a minor gameshow. And - point in fact - it wasn't out a whole weekend and I went from the envy of my peers to the butt of all their jokes in a very hot second. But in hindsight, I can honestly say that nothing better could have happened to me. A) it prevented me from being a child actor; B) it prepared me for the inevitable failure that comes in a life of the arts and if you can't handle it you have to get out quick.

4) Best experience has to be the BEFORE series, just because I was involved in the writing of those movies, and they become intensely personal for me. The worst, you never want to talk about because it gets overly quoted on the internet as soon as you say something bad about something or someone, it's all anyone wants to talk about. But I spent many lonely months and years in hotel rooms feeling like I was making a piss-poor movie and been depressed about it.

5) Is it okay if I say Leonardo DiCaprio? Because I know he's crazy famous and everyone wants to work with him, but I admire tremendously the way he has handled his celebrity. After the success of TITANIC, it would have been very easy for him to wind up another drug-addled casualty on the Hollywood Strip; but instead he's dedicated himself to making great films and doesn't he need an older brother? Or a bad guy? Isn't there a role for me somewhere?

I... from about 3 or 4 years in, realized that this was the most special endeavor of my life.

And in the last 12 years that we were making it, there have been many ups and downs in my career. And sometimes, when I would have a down period, in the back of my mind, I would never let myself get too down, cuz I was working on the best film of my life.

I just had to be patient and wait for people to see it.

There's a scene when my character Jake in TRAINING DAY is left for dead with a Mexican cholo gang; that still haunts my dreams sometimes. Also...

People don't ever want to hear this, because it destroys the fantasy, but anytime you have to kiss anybody, it's never stopped being strange.