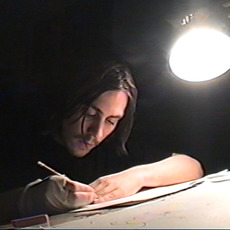 About
creator of many animated films, including Everything Will Be OK and the Academy-Award nominated Rejected
Reddit AMA Stats
Tag Cloud
independent-film, animator

i am a don hertzfeldt... filmmaker: AMA

hi it's don hertzfeldt (filmmaker) how are you? AMA

that was YOU? she gave me a call and we have been making out all afternoon on a heap of stale pie

hey, thank you for telling me. also you have cake or pie next to your name

you won't believe this but one of the directors actually wrote to me through facebook.. i guess they didn't know how else to reach me. they invited me to do a thing if i had any ideas... the process was very normal, please send us a synopsis for approval, then send us storyboards, then an animatic, etc... and i sent them a synopsis in a couple of paragraphs which probably made no sense whatsoever, but to their credit they were cool with it, and then i said, guys listen i don't really do storyboards and have never even made an animatic before, can i just plow through animating the thing and if you don't like something i can change it? i don't know what a storyboard would have even said.... "lisa-blob says, ARARARRRARRUUGHH" it is more about timing and energy than shot selection. i'm also not really at my best until i'm in the middle of something and playing around in it. i don't like to calculate too much. and they were cool about everything. it wasn't even supposed to be as long as it was but they gave it the extra time when it grew. i still haven't met any of them, oddly.

GET OUT OF MY HOUSE

get out of my shower

most of my favorite bands are only known to the general public from their hit singles. which is fine. but there are usually way better songs to be found on the albums

lynda barry said something really great about this and i am paraphrasing badly, but you need to try to return to the time when you were a little kid, creating things on a big sheet of paper in a beautiful sunbeam, and not having any cares at all about how it might one day be received. it's when children learn to think, "is this any good?" that they start to become paralyzed creatively. and this is why most adults don't draw, don't write, don't sing, don't dance, and are terrified in front of audiences.

for the survival of young short filmmakers and aspiring animators today, we really need to begin training people to pay for short films. theatrical tours and dvd sales and the old models that i relied on are not going to be realistic much longer for them (or even for me). i know everyone is used to the free youtube model but without a viable market for shorts online, it is really going to continue to hurt them. right now these artists are basically being taught that their work has no value.

i was on the sundance jury a couple of years ago and saw amazing short film after amazing short film. and many, if not most of them, are still not available online. these are wonderful films that are disappearing after a few festival screenings because many filmmakers aren't even bothering with the internet... "getting exposure" doesn't fund films.

when you pay to see a movie you are casting a vote. you are saying, hey please go make more of this sort of thing. it's strange to see people bemoan current releases in theaters but then see them go line up for them on opening weekend anyway. they seem to forget they have a choice. hollywood wants to make lots of money, they are not very complicated. if they can keep making lots of money from us by continually selling us junk, they have no motive to sell us anything else.

there's even more at stake in the independent world. when you pay to see an independent movie, you are casting a vote that says, hey i'd like you to actually have the chance to go make another one.

now look what you've done, this is at the top of the page