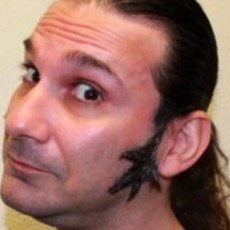 I am Dino Stamatopoulos, famed comedy writer, creator of Moral Orel and Mary Shelley's Frankenhole, Community's very own Starburns, and Executive Producer of Charlie Kaufman's Anomalisa, Ask me Anything!!

What are you guys reading this for? Our President's doing an AMA right now! I'll keep plugging along, though. Just thought I'd tell you.

I do whatever my friend Dan says, so yes.

That Dan Harmon was fired.

By doing blow and and having some dame beat me.

The very first episode I grew out my sideburns thinking they would sculpt starburns out of them. To my surprise, they shaved them all off and stuck on phonies. They didn't look that great so for the rest of Season One, Two and most of Three I shaved the starburns in myself, drunkenly.

I would usually grow them out a week in advance and then shave then the day before shooting. My sideburns are actually very gray because I'm old and dying. The make-up dept. would then darken them with mascara or something.

When I was not shooting and had the starburns on my face, people wouldn't really notice because the grayness of the 'burns would meld into my gray, ashen, dying face.

People still recognized me here and there because I have a big, weird face. Everyone's always been very cool and supportive when they recognize me.

Then, the last two episodes of Season Three, they made some realistic fake starburns and I wore those until the end of the season.

Starburns fakes his own death and puts on a disguise. Right? I think I saw that episode...

Usually when I'm shooting I never read the script and just do what they tell me to do. I'm not really an actor and seeing the script beforehand would just scare the shit out of me then I would get drunk and hide and never show up to shooting. But with not reading the script I just get drunk and show up. I guess what I'm saying, I don't really know for sure what happened to Starburns.

He would have probably showed up in Season Four, I assume, with his new affectation being the short-blond-wig disguise.

I mean, he still might show up, but it won't be me playing him. If they do bring him back, I hope they choose one of the every other humans in LA who want an acting job.

Don't get me wrong, it was fun doing that role for my friend Dan, and I would have done another season if he was doing another season and wanted me there. But now, I have absolutely no loyalty to that show.

Dan's a creative. Sony is a corporation. Of course, I'm going to side with the creative. Who was right? Who was wrong? Nobody. Who's going to ultimately win? Dan.

I had an easy time working with him because I wasn't in many shows and got to go home early when he was being an asshole.

Hi everyone. Just doing my vocal warm-ups. See ya in twenty!