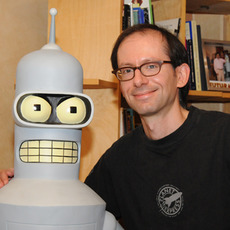 About
primarily known as David X. Cohen, is an American television writer. He has written for The Simpsons and he is the head writer and executive producer of Futurama.
Reddit AMA Stats
Tag Cloud
simpsons, futurama, television-writer

I am David X. Cohen, head writer on FUTURAMA - AMA!

Done. I just emailed it. Seriously. You owe me. Maybe draw me a picture or something.

Why not "Why not Zoidberg?" Of course I love that people have run with these in ways that we did not anticipate. Of all of them I would say there is only one that, at the time we wrote it, I really felt like we had generated something meme-worthy. That was "Shut Up and Take My Money". Other than that, credit to our fans for elevating these to meme status.

A mix. Probably about 50-50. We write some into the script, and sometimes they surprise us. Sometimes we mention something in passing, like calling for an "Escher-esque" background, and they go nuts and animate a 3D landscape of rotating gears in an impossible Escher geometry. Also sometimes too they try to sneak things by us. For example in the "Beast with Two Bucks" alien sex shop, which will be appearing again later this season, we didn't notice until the episode was almost done that they had stuck a few too many disturbing alien "toys" in the display cases. We might have managed to erase them in time. Don't look to closely.

We had a ridiculously over-educated writing staff on Futurama. I ranked somewhere in the middle with my BA in physics and Masters in computer science. We also had Ken Keeler with a PhD in Applied Math, Jeff Westbrook PhD in Computer Science, and Bill Odenkirk with a PhD in chemistry. And throw in Stewart Burns with a masters in math. So it was very rare that we did not feel we could deal with the actual science ourselves. However, on rare occasions when I did feel the need to go beyond our walls, I most often consulted my old friend David Schiminovich, who is a Professor of Astrophysics at Columbia University.

As for the theorem that saves the day in the episode "The Prisoner of Benda", that was a real theorem proved by Ken Keeler. In the characters had all switched brains according to certain rules (the same two characters couldn't switch back once switched), and as we worked on the story we became curious about whether it would in fact be possible to get the characters out of their predicament. Ken proved the theorem and we decided to actually feature it in the episode. It's a group theory problem, for you math people.

Regarding the grandfather paradox in "Roswell that Ends Well"... errrr... to be honest, I don't think we tried to hard on the science there. Once you get into time travel, all bets are off. We just put it out there and hope no one complains too much.

We thought about this quite a bit... the one we almost attempted on several occasions as a "one episode" spinoff was the Zapp & Kif show. That's an example of an episode I always wanted to do that we still didn't get around to, even after the four bonus seasons on Comedy Central. My glorious dream was to do a Star-Trek-style episode where we stayed with Zapp and Kif's mission the entire time, and just have them run into the Planet Express crew in passing at some point. We would have also done a full new version of the opening credits and all. We never quite figured out the story for this one. Also we were nervous that people would get confused and angry, and throw things at the TV. I guess we panicked and chickened out. Now I feel bad.

I feel like we're starting to get pretty good at writing series finales -- it's a bad sign when you have a lot of experience doing that. We are definitely going for the model of "Epic Sci Fi" blended with "possibly heart breaking emotional story". In that vein I think it's a little closer to "The Devil's Hands" in that we will spend more time on the Fry-Leela angle. As I've mentioned elsewhere, we will actually see Fry and Leela's real, genuine, actual, factual wedding in this one. People get angry with me for saying that because they think I've given too much away, but rest assured that it moves onward and upward and backward and pretty much in all directions from there.

I usually cite "The Luck of the Fryrish" as my favorite. That's the one where Fry learns about his long-deceased brother. It was the first episode where we out-and-out went for a tear in the eye at the end of the show. This is a high degree of difficulty on an animated show, so we weren't at all sure if it would work well or how people would react. It turned out to be a fan favorite and subsequently I think it became a trademark of Futurama that we would go for these emotional endings a couple of times a year. Just when you least expect it -- WHAM! Your crying at a dumb cartoon.

I also want to put in a nod for "Reincarnation", the episode where Futurama was animated in 3 different styles. The animation (directed by Peter Avanzino) was stunning, but also we shot high on the writing... each of the three parts hinged at a key moment on something BEYOND impossible to portray in its own style of animation (eg, not just a rainbow in the black and white episode, but a rainbow with a NEW color). That wasn't easy to concoct. And one of the three segments was about the nobility of the search for scientific truth... (why were we cancelled again...?) I like elevating science when possible instead of just making it the villain responsible for genetically-engineered viruses and so on. At any rate, you wouldn't see that subject matter on another show.

When the show first started we didn't know what the balance should be in terms of character stories and emotion vs. serious sci-fi themes. At first I think we erred in not diving far enough into the sci-fi... we were afraid it might undercut the personal stories. But as we went along it became clearer that taking the sci-fi space-opera-drama seriously only helped the personal stories. The dramatic tension when played seriously helps the jokes play better as contrast to that. So the surprise was that we could and should do both. In the best episodes we manage that.

When I was working as a writer at the Simpsons in the mid-late 1990s, there was a persistent rumor that Matt was concocting a new sci-fi show. But it was very hush-hush. One day he summoned me for a lunch meeting... me being the "nerd" of the writing staff -- a title for which there was extremely stiff competition -- he wanted to know if I might be interested in working on it with him. I drooled. In retrospect, it was a risky move to leave the Simpsons. Many other writers have made a full career there, grown old, raised grandchildren in the writing room... but of course at that time we didn't know the Simpsons would go 20+ years so it seemed like I was getting out just before it crashed in season 10 or so.

When Futurama first got cancelled after four seasons on Fox, it was a little more upsetting. Four seasons is a very intermediate amount... not clearly a failure or a success. Most shows get cancelled either several seasons earlier or several later. So we weren't sure how to feel. I guess we decided on "bad".

Now having done seven seasons by our count (we include the four DVD movies as season five), and 140 episodes, it feels like a good run. If you were told in advance your show would make it that far, you would jump at the deal. Granted it took us 14 years to do seven seasons, but still, not too bad.

Also with the 52 recent episodes for Comedy Central I feel like we really got to a lot of subjects that we wanted to cover and got to develop the characters quite a bit... and this current final(?) season ends with a very strong, emotional run. So all in all, yes, I will feel okay with it if this really is the end.

The idea of catching up to the Simpsons if we were to come back is definitely more of a nightmare than a dream. To do that, we'd have to get an order of "20 episodes a year for 20 years". Noooooooooo!