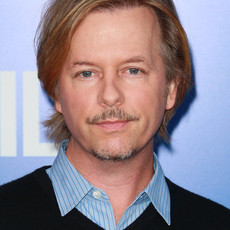 About
David Wayne Spade is an American actor, comedian, writer and television personality. He rose to fame in the 1990s as a cast member on Saturday Night Live, for co-starring in the 1995 comedy Tommy Boy, and from 1997 until 2003 when he starred as Dennis Finch on Just Shoot Me!. He also starred as C. J. Barnes, along with Katey Sagal, James Garner, and Kaley Cuoco on 8 Simple Rules.
Reddit AMA Stats
Tag Cloud
comedian, actor

Wow. There are so many Chris Farley stories to tell. I try not to overdo it, because they are very personal, but they are so funny, people should hear them. I just told one on Howard Stern this morning that was ridiculous. But I will say here's one: Me, Him and Adam Sandler were walking to dinner, during SNL, and this cute girl was getting in a cab, and we commented how pretty she was, so Chris ran over and climbed in the cab with her, and said "hey, you goin' downtown? Let's share a cab!" and she started yelling at him and kicking him. And he finally came back, and we said "Chris, if they don't know who you are, you are just a crazy fat guy trying to climb in a cab with them."

And then we all laughed, it was very funny to us. He would do stuff like that for us every day to make us laugh.

That's a great idea. I'm going to stop this Q&A and go and do that right now. And I'm going to give you no credit. :)

Well, I was trying to answer that earlier, we're putting it together now and seeing if we can keep it as funny and with the music we like for a lower budget. All the movies you hear about being made now keep running into budget problems, this and that, and it sounds boring, but it's just a new world, where they can't make those $15-30 million comedies anymore. It's either $3 million or $200 million, there's almost no in-between, so everyone's adjusting to either a summer tentpole Avengers-type movie, or learning to get down and dirty and gritty and making a smaller movie. I just don't want to burn the fans and want to make it good, so me and the other writer are combing through the sequel and trying to make it make sense and have good music and be funny within the parameters. So hopefully it will be soon, or it will be too pointless.

I have to say that the only good reviews I've gotten in my movie life were for The Emperor's New Groove. I really, really liked that movie. It was very hard to do (which sounds crazy, because it's only the voice) but the backstory was, it was originally called Empire of the Sun. And it was myself and Owen Wilson as sort of a prince and a pauper trading places type thing. And we got a year and a half into it, and Michael Eisner from Disney looked at a rough cut and said "I don't like it." And they got rid of everybody but Spade, and they had this dopey llama idea. It sounds like they just made it up on the spot, and he liked it, and somehow those guys put together a whole new idea, and it was really funny. And that movie is another one I hear about a lot, a lot of positive feedback, and I know I've said that about 2 movies so far, but believe me, there's 15 that don't get mentioned a lot. So I'm well-aware of the ones that people don't like.

That's a good question. Chris was always doing that bit to me at work. We shared an office, and you had to walk through our office to get to Chris Rock & Adam Sandler's office, so these 2 microscopic offices were back to back, and Chris' desk was behind mine, and he didn't really know how to write, or read, really (kidding!) but he would come in bored, because I would have to write my sketches to try to get on but they would always let him on, so he would get behind me and be bored, everyone would write him sketches, and he would say "Davey… turn around" and I said "if this is Fat Guy in a Little Coat I'm not turning around, it's not funny anymore." And he would say "no, i've got a whole new thing I'm doing."

And then I'd turn around, and it would be him in my Levi jacket, and he would say "Fat guy in little coat! Don't you give up on it!"

And so when we did Tommy Boy, we were just looking for jokes and scenes to make them better, and we decided that was funny to us, maybe it would be funny to there people. So we put "Fat guy in a little coat" in and he sang it (which was funny, and not the plan), and then we had to cut the coat in the back to make sure it would rip. So that was a long answer for the question of "did he really rip it." We had to make sure it would rip, and sound funny, so we had to help it a little bit.

But I don't have any great secrets other than I think I have to believe it all happens for a reason, because whatever happens, even if it's hard to get through, it ultimately seems to work out. Sorry if that's too heavy for everybody.

That reminds me that sometimes when I'm out, like in Las Vegas, this is a funny story that no one is asking, but it reminded me that I have such a sort of reputation that these girls come up and flirt, and they can't believe I don't flirt back, I had twice in one weekend these ladies come up to me and say that they're married but I was their "freebie." And I go "oh, that's so nice" and they're all like "no… but you're my freebie. Like there's no strings." and I'm like "great" and they're like "wait, you don't get it do you" and I say "Yes, I get it. I just don't want it." I think I have a vote in this too! And they're so hurt, mostly angry, they think that I'm going to grab anything in site from watching Grown Ups that they think I'm like that character, so it's awkward.

But I love my fans, and especially kids, it's always so fun to see a kid come up to me somewhere because they are nervous, and hilarious, and always very cute and polite.

Some people actually sit with me and that sometimes drives me crazy, when I'm at a dinner, but no one seems to realize when I'm in a booth having dinner, and then they just sit down and start talking, and I go "ooh." But I can't even almost get myself to say anything mean, because they all mean well, it's the worst thing, and if they're drunk, drunks are tough to deal with, because they're your #1 fan until you finally ask them to leave. Then not only do they hate you but they want to beat you up. So when they come up and they are tentative, and say "can I get a picture or autograph" and you say "yes," they are reading you, they are getting feedback, and you say "yes," and then they say "Can you call my friend, and leave a funny message" and then you can keep doing all of that, and then they say "Can you cross the street and say hello to my friends" and you say "no" and they say "What an asshole." I think if I were Brad Pitt, or Johnny Depp, I couldn't even handle it.

I think at my level, I can handle it, people think I'm a friendly frat guy, I've been out with Sean Penn where they are silent around him and they all come up to me because they're scared of him. It'll never sink in, but when they come up to you, most people are very very sweet. Most people are very very sweet. You just get the ones that are a little too drunk or a little nervous (which is funny too, because a lot of people have sweaty hands, and when they come up to me it's like shaking hands with a sham-wow) and then when they take a picture, they put their arm around you and their sizzling arm pit rams your shoulder. It's actually funny because all my friends know it now and watch for it now.

Thank you, first of all, because I loved the Joe Dirt movie also. It's the one I hear about the most, right behind Tommy Boy. I grew up in Arizona, and the co-writer, Fred Wolf, grew up in Montana, and we'd see guys like that all the time. Shirts off, carrying gas cans, questionable life, never knew where they were going or coming from, and I grew up with my brother Harry, a cage of rattlesnakes in his room, and guns, and craziness, in a small copper-mining town outside of Scottsdale, AZ.

So I lived a lot of this stuff, and think it's really interesting, and funny. We wrote a sequel, and we may wind up doing it on Crackle.com, because they want to be the first web address to do a sequel to a movie. Because Sony owns them, and it's a Sony movie. We're trying to find a way to make it for the budget, but we really want to do it. And keep it good.

I would ask Christopher Walken and Kid Rock to be in it again. And to take less money, if at all possible, than the amount they took the first time.

Christopher Walken was great, and he always had funny things to say. He worked on a movie called MOUSE TRAP and explained how it's different working with an actor dog than an actor mouse. It was one of the best conversations I've ever been involved with. And Kid Rock was my idea and I didn't know him, so we called him out of the blue, and he liked Tommy Boy enough to take a leap of faith and do this. He's very cool, and he's actually a very nice guy, which no one would believe, especially me. But he's one of my few showbiz buddies that I still talk to a lot.

I like the fact that you think you're the only one who remembers I was on Just Shoot Me! It was just on 8 years ago. Well, it wasn't like it was the show I Love Lucy, it wasn't that long ago. But I had a great time on that show. That was a really fun time in my life. I left Saturday Night Live, and was happy after about 2 years of that show, I realized we were going to stick around, and it was happy to have the monkey off your back, when you leave SNL it doesn't mean you're not going to do anything else in your life in show business. So to leave it, and then get something else that kind of clicked, and I could make money at, and was really fun to do, was great. So if I didn't have Just Shoot Me, I wouldn't have had a lot of stuff. I would have never gotten a cover of Rolling Stone, I never would have gotten the house I had, and I got to work with fun people and do a show that I was proud of.

Well, there is a little known fact that the creator of Just Shoot Me, Steve Levitan, went on to co-create Modern Family. So it's sort of, if you look at both shows, maybe there's similarities in the humor, but maybe not. But I love Modern Family.