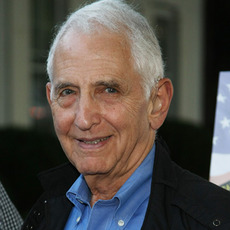 About
is a former United States military analyst who, while employed by the RAND Corporation, precipitated a national political controversy in 1971 when he released the Pentagon Papers, a top-secret Pentagon study to The New York Times
Reddit AMA Stats
Tag Cloud
leaker, activist, government, pentagon, controversy, analyst, military

I am Pentagon Papers leaker Daniel Ellsberg. Edward Snowden is my hero. AMA

I replied to this question over half an hour ago, then waited since then for more questions. Apparently my answer didn't show up; and I've just been shown how to see the 70 questions that piled up while I was waiting. (10:54). In other words, I'm not on top of this process yet.

Here's my answer of half an hour ago, to your question of whether Snowden should come back to this country. Let's see what happens:

No. Unlike me, in 1971, I don't believe he'd be out on bail or bond while awaiting trial. Like Chelsea Manning, he'd be in an isolation cell, incommunicado (Manning hasn't been spoken to by a journalist for the more than three years since she was arrested in Kuwait), probably for the rest of his life. The Constitution hasn't changed--the laws he is charged under, and I faced in 1971-73, would at that time very likely have been held to be unconstitutional in that application (to leakers: I was the first to be prosecuted for a leak, under the Espionage Act or any law). But with the new courts, that's much less likely. I don't think anything or anyone would be served by his suffering that fate.

Snowden has started the process off, by giving the public, through the press, the alarming information about how much we are being spied on by our government, with the help of the telecom companies. (Thus, the attempted reforms of the Church committee in 1975-76--which are now all shown, by Snowden, to have failed by now--had to be started off by the revelations of FBI abuses that came from the break-in to the Media, Pa. offices of the FBI in 1971. The story of that burglary, and what came of it, and the heroes who did it, has just been published in Betty Medsger's book "The Burglary," which couldn't be more timely. I urge everyone to read that, both as an inspiring tale and as a guide to what is needed in the way of a "Citizens committee to investigate the FBI" (and CIA, NSA) as they called themselves, and how reforms can be derailed over time.

We need another congressional investigation like the Church Committee, and to learn from that one how to do better this time. (E.g., don't hire staff directly from the FBI, CIA, NSA!) The so-called Oversight Committees that were created have been a total failure at oversight; they've been coopted into being a PR agency of the intelligence community, and a guardian of its secrets. Their own abuses and obstruction of justice deserves investigation by Congress: fat chance! But a new select committee, which would include types like Conyers and Amash, in the House, or Wyden and Udall in the Senate, would have a chance, and should at least be given that chance: with a long mandate, subpoena powers and a big budget. Meanwhile, we need More Snowdens! (Not fewer, as is said to be the president's misguided focus).

Your "horror" is justified and appropriate, and needs to be communicated to the publc at large. The dangerous alternative is that we accept the government's line, and its acolytes in Congress and the press, that this is all for our good, nothing to worry about, folks, trust us, we know what's best for you and that's exactly what we're doing (and all we're doing), etc...

We're in a constitutional crisis--have been since 9-11, but didn't seem to know it--which has come to the public's attention thanks to Snowden. Manning's revelations were horrifying enough to those who care about what we do to "others," foreigners, "enemies" and their relatives: but humans, not just Americans, generally don't get as upset about that as about what Snowden has shown our government does to "us," at home. We need to remain aware, however uncomfortable and frustrating that is, that what they've been doing is OUTRAGEOUS and intolerable in what we want to preserve as a free society. And then act on the enraging information to demand of our representatives in Congress that they act on their constitutional responsibilities to rein in executive branch abuses that violate the oath to the constitution that both Congresspersons and all officials take.

I think getting NSA truly accountable and under democratic control is a VERY challenging, difficult and uncertain problem. The four NSA experts who resigned in protest to its unconstitutional behavior since 9-11--Kirk Wiebe, Thomas Drake, Ed Loomis and Bill Binney--have recently published a list of reforms that they think necessary. To ensure that these are actually carried out--after Congress and the president have (under public pressure) demanded them, they propose a permanent Signals Intelligence Investigatory Body of technical experts embedded at NSA with continuous auditing and access to all NSA computers and databases, reporting to both congress and the FISA Court. Will the president or NSA readily embrace or "accept" such a body? NO. But Congress could create it and empower it, if they were sufficiently pressed to do so by a properly-alarmed public.

Yes, now that I've been endorsing Manning and Snowden and challenging the "executive coup" that I believe took place after 9-11. No, I can't point to specific harassment. But remember: Snowden has revealed that NSA has us ALL under surveillance. I'm just guessing that I'm one of the many (millions?) that are targeted for special attention.

WOW! That link is absolutely fascinating! (Even though I don't have the time just now to go through it in detail, as I will shortly). Thank you for the link! I have to ask, where is it from, where did you get it (on the White House transcripts)?

Well, in answer to your question, I just became aware of some surveillance on me (BEFORE the Pentagon papers came out) ten minutes ago, from your link. I was being surveilled because I was a witness in a criminal trial of draft resisters, some of the Minnesota Eight. Their very good lawyer has been accused, I don't know on what basis, of having been a Communist. And that allegation was not of particular significance to the DOJ UNTIL, months later, he was associated with me, after the Papers came out. Likewise, the president is heard discussing with Haldeman on these transcripts the need to go back over earlier (illegal, warrantless) wiretaps--of journalists and White House officials, on which I was overheard--to see what might look significant now, in light of the release of the Pentagon Papers.

That's what I've been talking about in earlier answers: the ability of the government to go back to taps collected years earlier to look for material with which to influence potential witnesses in the present. (See their interest in the allegation that the wife of one journalist may have been accused of shoplifting in her past). So people who have "nothing to hide" should ask themselves if that is equally true of their spouses or children, or neighbors, who could possibly be turned into informants by threat of their private lives being revealed. (The Cuban CIA assets who burglarized my psychoanalyst's office were interested in my children and wife as much as me, a reporter who interviewed them was told; they had been told of the precedent of Alger Hiss' step-son who was crucially deterred, at Hiss' insistence, from testifying in his defense at his trial on a crucial point, because he would have been questioned about his alleged homosexuality).

My analyst later apologized to me for not telling me about the break-in--which he was sure was aimed at me, by the White House--because his lawyer had advised him not to "get involved." So I didn't know about it until it came out in my courtroom, thanks to John Dean's revelation. All for the best. If he had told me and we had raised it in the court-room, the plumbers would not have been kept on the White House payroll (via CREEP) and would not have been ordered into the Watergate. Nixon would have stayed in office, and the war would have continued for years.

This is truly puzzling: why, in particular, has Obama prosecuted nearly three times as many whistleblowers/leakers than all previous presidents combined? I ask this a lot, and don't get very compelling answers. (Even my friend Noam Chomsky, who is rarely without answers and hardly naive about politicians, has said this has surprised him, and he doesn't know why). Today's news (NYT, Charlie Savage and Peter Baker, p. 1) about what he's likely to say on Friday says that he has to try to "placate civil liberties advocates" (i.e., those advocate observing the Fourth Amendment)"without a backlash from national security agencies" (i.e., those who have been violating the Fourth Amendment, with his acquiescence). Curious language. Unlike the civil liberties advocates--members of the public, evidently, not within the administration--who don't work for him, the national security agencies do, in principle (and according to the constitution) do work for him. Their officials can be given directives, and they can be fired by him (or prosecuted). What exactly is this "backlash" he has to fear?

Well, I'm not naive about how such power and secretive agencies can give even a president real trouble in his programs--and just possibly, worse than that. For whatever specific reasons, Obama does seem to run scared of them. As the NYT reports today, those agencies don't seem to be fearing what they'll hear from him Friday.

That would indeed be great, historic. I'll look into it; but I'm doubtful its feasible, because Snowden can't do e-mail except on a highly encrypted basis. He doesn't want to reveal his exact whereabouts to NSA. But maybe there's some way to get questions to him in advance (I think this is possible) and have him answer them. As I say, I'll look into it. Great idea.