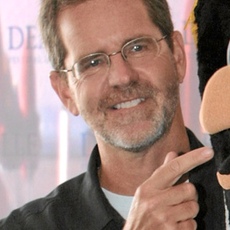 About
is an American film director known for co-directing Tarzan, Surf's Up, and Frozen.
Reddit AMA Stats
Tag Cloud
film-director

According to Chris, they didn't die on the boat. They got washed up on a shore in a jungle island. The queen gave birth to a baby boy. They build a treehouse. They get eaten by a leopard...

Kristen: They were going to Fantasy Island!! To fix the tensions in their marriage in a way only Ricardo Montalban.

Bobby & Kristen: We'd actually like to build a sandcastle.

Peter, Chris, Jennifer: As the southern Californians of the group - YES! We'd love to build a snowman!

All: Thank YOU for sharing. We just tried to create something funny and emotional - when it can change someones life it's truly special. We've all had those times in our lives and for us it was music and the artists of the world that pulled us out. Keep going! Sending warm hugs!

Jennifer: We don't remember which one of us it was but I remember wanting it strongly.

Jennifer & Chris: Originally, Kristoff punched Hans right after Anna froze but it took away from the moment. We really wanted it to be a POP, to be a surprise.

Kristen: It really made sense once we figured out the moment when Hans takes the turn. He needed to be punched.

Santino: That was SO unnecessary. I think we could have talked about.

Bobby & Kristen: Jonathan Groff isn't known for his singing. He's more known for his naked buttocks. Ha ha ha. Actually, we kept fighting the whole process to get a Kristoff song but Kristoff is such an introvert. He's the type of character who wouldn't sing until Anna helped complete him and by then we were into action all the way through the film. For the Broadway version you can rest assured we'll give Kristoff a bigger, longer, song.

P.S. There is a ballad - a love song to Anna that exists in an undisclosed location :)

Jennifer: I think Hans is a tragic figure because he's a consequence of being raised without love.

Peter: My proudest is the end of the movie with Anna and Elsa - both emotionally and visually stunning.

Bobby: The scene of "Do you want to build a Snowman?" It was so nearly not in the film but I love it. It took so much work to construct but was well worth it.

Kristen: My two favorite scenes "Do you want to build a Snowman?" because it has my daughter in it, and "Fixer-Upper" because my other daughter is in it! Also when Kristoff and Anna kick Olaf's head.

Chris: "Let it Go" because the song is so amazing that the pressure to match it visually was immense and I think we did it. It builds and it's such a beautiful piece. I'm really proud of it.

Jennifer: Ditto to what Peter said. The whole movie had to build to that moment, but I love the moment Anna throws herself on Elsa and says "The sky's awake..." because that's when I knew audiences were going to love Anna.

Chris: We had an intro for Kristoff that was action, mountain man, climbing with pick axes. It was great. With a fun surprise...It'll actually be on the DVD!

Kristen: We had a crazy Troll song that was about walking in other people's shoes. But it had this romantic music in the middle of it where Anna and Kristoff literally walked in each other's shoes and saw how each other saw the world. But it had a lot of lyrics about foot fungus.

The two women in the room were not surprised!

Jennifer: I did. The Little Mermaid came out when I was a teenager and I related to her. I loved it and sang the songs. I felt like with Frozen with what the girls went through, the teenage me could relate to that.

Kristen: When we wrote First Time in Forever - we thought about the first time you go out for a dance in High School. Jennifer should also get some love because of her accomplishments on Wreck-It Ralph.

Chris: What floored me was that my son's water polo teammate said he bought the soundtrack and listened to "Let It Go" over and over but with the windows rolled up!

Chris & Jenn: Thank you for sitting through the credits to realize that Marshmallow is still alive. Anythings possible, who knows what's next. We love these characters.