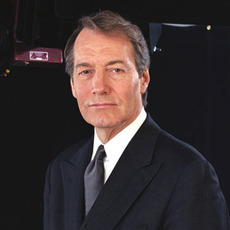 About
is an American television talk show host and journalist. Since 1991 he has hosted Charlie Rose, an interview show distributed nationally by PBS since 1993. He has also co-anchored CBS This Morning since January 2012.
Reddit AMA Stats
Tag Cloud
talk-show, journalist, television-host

Hi, I’m Charlie Rose, co-host of “CBS This Morning” & host of “Charlie Rose” on PBS. Ask me anything.

Easy. Robin Williams. He went on a riff about my heart surgery and I don't know if there's an improvisational comedian that's ever been better than Robin Williams.

I was born in 1942 in a small town: Henderson, North Carolina. About 15,000 people. My father fought in World War II and my mother and I lived with my grandparents; when my father came back, my responsibility was to get up every morning and open the store. The interesting thing about my dreams was that there was a train that ran from Boston to Miami that came close to our house. And I would look at that train -- it was always going north -- and think, wouldn't I love to be on that? I didn't know journalists and I didn't know actors and I didn't know architects and I didn't know scientists. I knew lawyers and doctors and businesspeople. But my whole drive was to experience, to live, to access as much as I could. To have my driving passion be curiosity. All of the passions that have served me, made me. Curiosity, drive, the pursuit of experience. Whenever I look back, I know I learned more from when I said "yes" than when I said "no."

I understand what my role is, which is not to be an advocate, not to be someone who is pushing an agenda. It is in a sense to find out a story and bring to the table as much information and preparation as I can. I've never thought of myself as an advocate; I'm simply a reporter. My role is to simply use whatever skills I have to find out what happened, why, who.

It's hard to say. I think mainly of fields. Among politicians, certainly Bill Clinton because he's engaged by a whole range of subject matter. When I think about athletes, probably my favorite guest of all time among baseball players was Ted Williams. Richard Serra, the great sculptor, personifies an artist for me. When I think about science, certainly Eric Kandel because of the Brain Series we did. Actors: Clooney, because of friendship, but British actors are interesting because of simply the diversity of what they bring to the table from Shakespeare to comedy to James Bond. The person I've always wanted to interview but never met was Richard Burton. I also like a lot of directors; the one I've never interviewed is Spielberg, but I like Sam Mendes. As a general rule, I like artists and writers -- people who are creative. Increasingly, I find scientists interesting because of their work.

Sometimes there are misconceptions about people simply because you don't really know them. The most recent was Brian Moynihan, the CEO of Bank of America. What I know about him came from what I had read. He hadn't done much media. I found him to be engaged, candid, responsive, all those things. That's really what you look for in a guest. One of the misconceptions about Ted Williams -- he had a reputation for being standoffish with the press. I went down to Spring Training and I did an interview with him in which he was smart and talked about the intricacies of hitting a baseball. What came out of that was a friendship -- I went back to Spring Training and talked to him a number of times.

I had been to the museum that morning. It was a Saturday morning. I had taken with me my new MacBook Air. As I was coming back, at the intersection of 59th Street and 5th Avenue, I tripped on a curb and put my hand out to save the computer, but in the process got a black eye. Rather than making up a much more interesting story, that's the story. Apple I think offered to make a commercial but I didn't take them up on that.

These are all the questions that I would ask. And I don't have a great answer. I'll say three or four. Gorbachev, even though it was in Russian with a translator, there was a chemistry. I later did an interview with George Shultz and Gorbachev which was interesting. The interviews I remember are those in which you're either hearing something that you haven't heard before or in a way that you haven't heard before. A small example happened last night. I was talking to David Boies on the PBS program and we talked obviously about same-sex marriage and this unlikely partnership between Ted Olson and David Boies, who'd been opposite counsels in Bush v. Gore, and now they come together for this very special case. It became a conversation with David, who's a very good friend of mine, about Bush v. Gore, and it was real -- the best interviews have people answering questions in a way that they haven't thought about before. It's a bit like acting. The best actors have always told me that the essence of acting is to be able to say the lines as if you have just thought them. So that you're expressing them for the first time. It's like you just thought this. Those kinds of interviews have been the most memorable for me. I remember there was a writer who came who was living with AIDS and died from it and he came and said to me, in an amazing way, "I just wanted to come sit at your table before I died." Those kinds of interviews you remember. You remember in Haiti as you're walking through mud and looking at a young woman who lost two children in the earthquake, had been living in a tent for two years, had two kids tucked in behind her, and was talking about how she lives from day to day. Chuck Close once told me art is about making choices, this color, this paint, this movement. If you can lock yourself into how people do what they do best, that's a memorable story. Bill Clinton talking to me about the first time they realized they were in trouble in Iowa. I think that played a role, among other factors, in sort of the coming out of Barack Obama as a serious candidate in 2008. The fact that Bill Clinton was concerned when he talked to me reflected an awareness that they knew something was up.

If you can get people where they're thinking out loud and revealing things that they might not have thought about, but they're so caught up by the engagement, that they feel a desire for themselves and for you to tell you about choices they made and experiences that shaped them, you always want to know, "What was it that made you who you are and enabled you to do what you do?"

I think 9/11 -- the enormity, and the immediacy, and the moment in New York when we realized what had happened and what was happening. It seems like for 30 days I did nothing else but report that story. All of us remember where we were when we heard. I was in Manhattan and immediately went to my office and figured out how we could start broadcasting. The stories that go to my bones are stories of children who are fighting battles that you know they are going to lose and yet they have a spirit that is undeniable and a will to live. Those stories where you have contact with a small human being who is fighting the good fight. What you want to do is not ask, "What do you feel?" But get inside of them so that what they feel is so evident that it speaks for itself.

Anything with peanut butter.