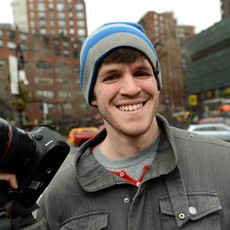 About
is an American photographer and blogger, most known for his photo blog, Humans of New York (HONY), started in 2010.
Reddit AMA Stats
Tag Cloud
blogger, photographer

I am Brandon Stanton, creator of the Humans of New York blog. I've stopped, photographed, and interviewed thousands of strangers on the streets of NYC. AMA

Quit trying to get me in trouble Alex. I said that I hate when my photos show up on the front page of Reddit without any attribution. :)

I think you're probably onto something there.

General: In certain neighborhoods, you have people who like to "protect" their blocks. They will tell me that you "can't take photos" here. I'm just sincere with them, tell them what I'm doing, and walk away. Not much problem with authorities. I think New York cops are used to people running around with cameras all the time.

Specific: Once there was a woman in a beautiful black fur coat, sitting alone on a bench, overlooking Harlem Meer. I asked her for her photo, she said "yes." Her boyfriend came over and said "no." She begged him to let me. He said "no," then walked away. When he left, I whispered to the girl: "let's do it now." I thought she was going to be excited. Instead, she called her boyfriend over and he commenced with the chest bumping. I'm 6'4", which helps.

HONY is about conversations. I use the word "interview," but it's really inaccurate. Tape recorders, notebooks... these things create a formal atmosphere that I want to avoid. I just want to talk to people as if I'm talking with my friends. That's when you get the belly laughs and spontaneity.

Somebody recently followed me and said: "You just interact with people. It seems like the photo is actually pretty secondary to the process." I loved that observation. It really articulated what I'm trying to accomplish with these interactions.

It constantly amazes me how brave these people are, and how much they choose to disclose. AND that they don't write me and beg me to take down the post. (Only happened two or three times.) When I first started, I was amazed that anyone would let a stranger take their picture! Now, I've found that there's very little a person won't disclose. You know why I think that is? Because so much of our life revolves around small talk. Weather, finances, things like that. And here comes somebody on the street really digging at the marrow of your life, and your experience. I think it's validating in a deep sort of way.

The early days were very tough. Six months in-- I was broke, I'd taken thousands of portraits, I didn't know anyone in New York, nobody was paying attention. Every time I talk about it in a speech I start crying. I'd been working on HONY everyday, non-stop, for a year before it got any traction at all.

The early days of HONY were lonely as hell. Why'd I stick with it? I was obsessed. I just thought HONY was such a cool idea and I just knew there had to be a way to make it work. The only time I was happy was when I was photographing. It's when I stopped that I got sad. My first Christmas season in New York was the saddest time in my life. I couldn't afford to go home. I just photographed my way through it to keep from being so lonely. I photographed all day Christmas Eve and Christmas Day.

I've said publicly that I don't want to "cash out" or "monetize" HONY. I like to say it publicly because I want my audience to keep me on mission. HONY print sales have raised nearly $500,000 for charity in the past six months. I want to further monetize the site for non-profit ventures. I honestly want to "give" HONY to New York in some way.

Freelancing and book royalties are keeping me afloat now. I get money for collaborations, occasional magazine pieces, occasional speeches, etc. And I signed two book deals which pay the rent. Also, I live cheaply.

I'm up to about a 65% success rate, and honestly, I think I've gotten about as good as I'm gonna get. Some people are just absolutely not going to let a stranger take their picture. How's it done? Sincerity. A quiet voice. A smile. Sincerity. Sincerity. Sincerity. I don't put on an act. I've seen so many people talk to homeless people like a child. I really don't talk to anyone with a tone of pity. I think it's condescending. I try to approach everyone the exact same way.

Haha! Do I get every single word right? Surely not. But I will say this. Out of 5,000 posts, only two people have ever followed up with me to say they'd been misquoted. One was pretty bad--- I said that "dad's girlfriend" had cancer instead of "mom's boyfriend." The other was a tattoo explanation--which I swear the girl decided to change after she spoke to me. :)