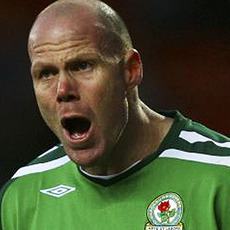 About
is an American association football goalkeeper for Tottenham Hotspur in the Premier League. He played 82 games for the United States national team between 1992 and 2005, and represented his country at three FIFA World Cup tournaments.
Reddit AMA Stats
Tag Cloud
soccer, goalkeeper, fifa

Original question: "Brad, will an American goalkeeper with a full head of hair ever start again for the national team?" Original answer: "No. lol"

When I was younger, I always wanted to be the #1 GK, I can't lie - I would never be that upset if the GK playing besides myself made a mistake. However, I would have never had wanted the team to lose. That is just human nature. However, at Tottenham, and at 42 years of age, I definitely do not have these feelings and I always want Hugo/Tottenham to do very well.

When I played for Galatasaray and we played Fenerbahce at home, that is by far the craziest atmosphere I have ever played in. For me, the louder and crazier the atmosphere, the better it is to play in.

I've never been in awe of a player, however I've been fortunate enough to play with and against some of the best players of all time. So people know, yes Gareth Bale is in the top 7.

Yes, I'm currently taking my UEFA A license and I hope to complete this in one year's time. And, if successful, I will then move on to my pro license and at that time I will make a decision on what I want to do in regards to coaching/managing. I want to learn as much as I can before I jump into that arena.

I always hope my favorite moment will be around the corner. However, our run with the US National team in the 2002 World Cup always stands out as special in my mind.

Sorry to shock you.

Some goes on from time to time. In England, it's generally what we call "friendly banter" rather than actual "trash talking."

I really enjoyed playing for Martin O'Neill. He has one of the best characteristics that is needed to be a manager, and that is thoughts are his own and no one can change his mind on them. He was a leader and he was very good to work for. You always knew where you stood.

Brad Guzan is an outstanding goalkeeper. The US and Aston Villa should be very happy to have him. When Tim Howard decides to retire, in my opinion, the US can easily count on Brad Guzan to continue with the great work that Tim has provided for the US team for the past few years. Also, I think Aston Villa will get equally as good service from Brad for as long as Brad can keep himself fit. He is an exceptional professional and a great teammate.

I really enjoyed my time at Aston Villa. Randy Lerner is an exceptional owner and he has Villa in his heart and the club is run the right way. I know the last two seasons haven't gone according to what a lot of the supporters expect, however knowing the ownership group they will get it right. And I hold Villa in high regard as well.