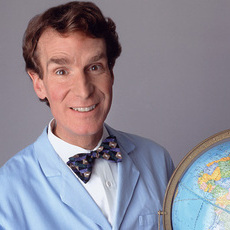 About
best known as the host of the Disney/PBS children's science show Bill Nye the Science Guy (1993–98) and for his many subsequent appearances in popular media as a science educator.
Reddit AMA Stats
Tag Cloud
comedian, writer, actor, television, scientist, mechanical-engineer

Bill Nye The Science Guy here! Ready to take your questions about science, space and how things work

I am Bill Nye, CEO of The Planetary Society, joined by our embedded reporter Jason Davis. We're test-launching a solar sailing spacecraft next week. Ask Us Anything!

I am Bill Nye and I’m here to dare I say it…. save the world. Ask Me Anything!

I’m Bill Nye and I’m on a quest to end anti-scientific thinking. AMA

You and I are made of the same material as the stars. We are star dust. Therefore, you and I are at least one way that the universe knows itself. Cue the spooky music.

He and is companies are shaking things up in a great way. Some disclosure, he served on the Board of The Planetary Society for a while, but has had to recuse himself as SpaceX became Yuge. (I gave him a ride to the airport once.) The Tesla outperforms conventional gas-powered cars (as does my new all-electric Chevy Bolt). If the reused lower stage of the Falcon rockets proves profitable, it will change space exploration in great way. Go Elon! (He's an immigrant to the U.S., bt-dubs.)

Oh we hang out all the time. He comes by The Planetary Society; we talk about the cosmos and our place in space.

The fossil fuel industry has successfully introduced the idea that ±2% is somehow the same as ±100%. Just as the cigarette/cancer deniers, did, only global and affecting billions rather than millions. Sooner we embrace renewable energy sources, the sooner we can bring the military home and be energy independent. Let's go!

Self-driving vehicles seem to me to be the next Big Thing. Think of all the drivers, who will be able to do something more challenging and productive with their work day. They could be erecting wind turbines, installing photovoltaic panels, and running distributed grid power lines. Woo hoo!

I felt deep concern for the future of Kentucky science students.

That's what was going through my mind.

That the universe is not slowing down in its expansion, it's accelerating.

And, do you know why?

The quality of life for people everywhere will go down. There will be less food and less clean water available in the developed and the developing world. It's reasonable that this will lead to conflict: more violence, more war. Here in the super-developed US, people will have to abandon homes in Miami, Galveston, Norfolk, and other coastal towns. It will lead to defaulted mortgages and people looking for jobs inland. Where will those jobs come from? Sooner we get to work the better.

We would have a Carbon Fee. We would charge everybody who produces carbon dioxide a fee, and that fee would go into a central fund, and be redistributed. This is how it's done, in of all places, Alaska. The model for this exists in a very conservative state. So it is very reasonable that we could expand this model to the country and then the world. The average citizen of the US would receive, would get back, about $3,500. Oil companies have already built this fee in- they are planning for it, they know it's coming sooner or later, it's in all their financial plans. If we could see this moment, we could change the world.