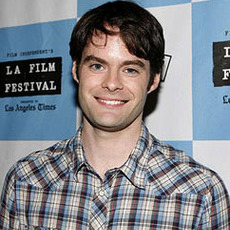 It was a blast. First movie I ever did. Major memories: Danny McBride and I watching the Tyra Banks Show at lunch everyday and the stuntman breaking his leg for real in the opening scene!

Man that means a lot to me. Seriously. I remember seeing Dana Carvey and Phil Hartman growing up and having the same feeling. Tell her thank you and to get out there and fail! It's the only way you'll learn. Stay tough and have fun.

The sketch I was the most proud of was probably one about your neck of the woods. It was called Do You Go Runnin Round Re Ro and it was a take on British Gangster movies and how we Americans can't understand what the actors are saying with those thick Yorkshire accents and all. And my favorite Stefan line was "Jewish vampire Sydney Applebaum."

HAHA! Me, Bill, I'm a geek, so I love The Strand Bookstore. Central Park (esp Sheeps Meadow) is a great spot to hang with the fam. The Natural History Museum has a great water park-type thing in the back for hot days. And, of course, BOOOOOOOOOF!

That made my day. So hard to do that properly. Kate McKinnon does a good one too.

The first time we did it, Fred just starting doing that voice ("Whaaaaaat are you doing here?!") and Kristen and I were like "What?" It was so funny. I hadn't heard him do it before. Man o man it made me laugh. Then it became a game of who could stretch out the vowels in their sentences the most. It got crazy. THANKS!

1) I was told about it from basically my entire family, including my wife who I honest think is running it. That's very flattering re: tumbler. 2) Franco. 100 percent.

If I want to see the movie and it's an interesting part to play, then I'm in! Stefon was given away by Italian Club Promoter Gay Liotta.