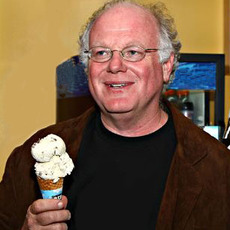 We are Ben Cohen and Jerry Greenfield of Ben & Jerry's ice cream. Go ahead and ask us anything!

OOOH! I think that's a great idea. No, I had never thought about having flavors from the graveyard come back for Halloween, but I think the guys here... might work to resurrect them!

You know, I think Mr. Germ brings up a very interesting...uh...whaddya call...conundrum. And when I lick the fish - lick the ice cream off the fish so I can see them - it's clear that the chocolate is shaped like fish. But I believe that, lexiconically speaking, Mr or Mrs Germ points out a problem that - some kind of problem.

It's not said quite right.

But the important thing to know is that when you DO lick the fish, you find the fish are smiling.

Well, Jerry's a lot more diplomatic than I am. In the early days of the company, you know, we'd be walking around, I'd be first, he'd be second, I was just walking faster, and you know, I'd be coming up to people and I'd say "This is wrong, that's wrong, you could do that better" and Jerry would be walking back and saying "What ben MEANT to say was..." he would put it in, you know, a tone that people were more ready to accept the input in. And I have learned quite a bit from Jerry.

I am more cute and adorable NOW because of my relationship with Jerry.

Well, in the early early days, I was the ice cream deliverperson.

And in the early early days, we had a Vermont Maple Walnut ice cream. It was a flavor. And nobody ever bought it, and I'm wondering Why is there this flavor and I finally did a promotion one time, at the State Capitol House, and I discovered the only people who eat Maple Walnut are politicians.

I think they're just trying to prove that they're really Vermont-y or something!

Well, it was the woman who came up to me and said "I call one thigh BEN and the other thigh JERRY."

It doesn't matter if I like the flavor or if he likes the flavor - if not enough people buy it, it goes bye-bye.

Personally, I'm stamping my balls off.