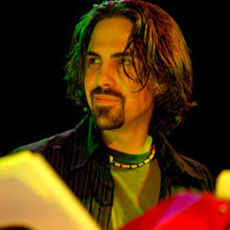 I Am Bear McCreary (@bearmccreary), composer for "Battlestar Galactica: Blood & Chrome," "The Walking Dead" and other cool stuff. AMA!

I had no idea! I had no clue what the meaning of the song would be in the fourth season. All I knew was that I needed to do an arrangement of Bob Dylan's song and do it in a 'BSG' style. I kept the lyrics and basic vocal melody the same, but really started from scratch with the music. Somewhere in there, that 12-note line really spoke to me, and it became the basis for what I was doing.

Then, over a year later, Ron called me and told me (SPOILER ALERT!!!!!!) that he needed the final coordinates for the ship's last jump to be channeled through Kara, remembering the song she was taught as a little girl. So, I called up Kevin Grazier, the science advisor and asked him how the coordinates work. He told me we needed 12 numbers to describe a location in three-dimensional space.

It was crazy, like it was pre-ordained. I knew in an INSTANT how to do it, because that melody happened to be 12 notes. It was one of those moments when you feel like things must happen for a reason.

That's a tough question. To be honest, I don't approach scoring for space or science fiction any different than anything else. For me, it's about the tone and the characters. 'BSG' tapped into something primal for me, something primordial. Long before I knew what the last episode would reveal, I was drawn to the mythological elements in the names and locations, and the archetypes of the characters.

So, I wanted the music to sound old. Not just old, but ANCIENT. The oldest instruments in the world are the human voice and percussion, followed shortly by primitive woodwind instruments. So, those are featured prominently in BSG.

There's something so weird about watching spaceship dogfights while hearing ancient music. It just clicked.

Solo accordion and banjo work for you?

The hybrid. I have a thing for chicks that sit in bathtubs, stammering nonsense all day and night. :)

Aw, that's fantastic! Thanks for letting me know. :)

Eddie and I are pretty close. He's an amazing man, and yes, he does exude this natural gravitas that's undeniable. We call him the Admiral. He even signs emails like that. He's awesome. A very inspiring guy.

This is the single greatest frustration of my professional life. Welcome to the club.

Maybe when we're done. Once I know how it ends. :)

It was a Ron Moore idea. He had wanted to use it since Season 1. Finally, Season 3 gave him the perfect chance. Oddly, though, he gave me no real input for what it should sound like, so I had complete creative freedom to interpret it and change it as I saw fit.

The Signal was probably one of the hardest pieces I've ever written for a choir. First of all, it's in 7/8. Second of all, they're chanting assymettrical rhythms that never repeat. Then, they have to sing in Samoan. And it swings! That took a little while to get right!