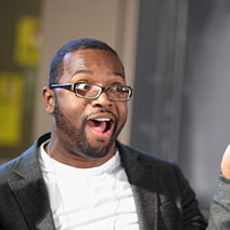 i thought i might, especially from black republicans on-site, but the opposite was the case. they don't live in a total denial bubble and understand that the two percent black makeup of the GOP is terribly low. they were amused at the count, which made me feel good because it was a reminder that they're actual PEOPLE and not just distant ideas i dislike

best example of this was my interview with super black republican (super republican, not that he's more black than other black folk!) Paris Dennard

Keep the faith people. Other things happen in life outside of AMA, and there's a hurricane effect, no power, choppy Internet, etc. I said I'd be back, and I am.

There are several reasons I support the president for a second term. There are also reasons I OPPOSE Romney for a first term, but I'll focus on the former. Before I get fully into it, I just will dig into your comment a bit in parts.

you wrote: "I can't help but think that because he's black he gets the black support other than support from people(Regardless of race) that know and agree with his policies."

So I'm in the camp of people that know and agree with his policies, which seems to me a great reason to support a politician. In fact, it's the BESt reason! :)

you wrote: "I know its wrong, but I haven't seen him really do anything for the people that got him in office."

i think the president's job is about more than only helping people who elected him. It's about leading the nation, and overall, I'm really happy with how Obama has done that and even moreso when you consider what a mess the last president left the nation in. Just the sampling above has been good for ALL Americans, even those who did not vote for him. That's the test. Plus, if he only worked for people who supported him, he'd be a massive asshole.

As for Chicago, there's very little direct action a U.S. president can take to reduce violence in a particular city, so I don't hold him responsible for the tragedies there. On a wider level, a president can try to set priorities and actions that provide opportunities and a future for the young folks at the heart of the violence and for their parents, and this president has done that more than his opponent might have

You can search for things like List Of Obama Accomplishments and find campaigners, journalists, etc who have itemized the specific things this president has done. I've listed a few that stood out to me, but let me just say on a more general and personal note....

We have a great president. He's not perfect, and I don't support or approve of everything he's done (skynet drone warfare what's up!!?), and I wish he would prioritize things not discussed (ahem, we can't imprison EVERYONE), but I don't expect perfection from any president. I expect intelligence, competence, effective staffing of government positions by people who won't sell the job to the highest corporate bidder, empathy, and judgment. This dude has all that and then some.

I don't think Romney is a bad person, but I know he would not do nearly the quality of job as the guy currently behind the wheel. Also, you need to have some GREAT reasons to fire a sitting president. He's got to be truly terrible or the other candidate has got to be demonstrably better, and I think neither condition is met in this election.

We have a great president. His opponent is not nearly as good. These are our choices. I happily choose Obama.

Also, he's black, but that is SO LOW on the list.

i do not. I don't like using hacks to shut up idiots. I'd prefer if a) they just shut up on their own because they realize that their inner sadness cannot be satisfied by lashing out irrationally at the world or b) no one listens.

when it comes to trump the great tragedy for me isn't that he has twitter followers. after all, empty chairs have twitter followers. no, i am just very disappointed in people with power who feel no hesitation or shame in associating themselves with this poisonous clown.

included in that set are: NBC, Mitt Romney, many republicans, business people and others who not only SHOULD but actually DO know better.

they're all feeding the troll

My name is Baratunde, and I approve this message.

1a. strangest to write "The U.S. Propaganda Machine: A Middle School Paper" I found an old essay I wrote in 8th grade after I'd been reading a lot of Marcus Garvey. I was attending Sidwell Friends School (great private school in DC) and had only been there one year. I decided it made sense to write a scathing critique of America and white people in general as if I were the leader of all black people. this HAD to go in the book, but it was strange reliving that experience

1b. hardest. the chapter about my father's murder. i didn't expect to include anything like that when the book was initially sold to Harper

and i can't remember all the headlines I wrote that made it through, but they were heavily political

the most MEMORABLE contributions I made there include having our digital team make a playable version of Close Range (http://www.theonion.com/video/hot-new-video-game-consists-solely-of-shooting-peo,14325/) and getting #horsemasturbation to be a trending topic on twitter, all in service of Onion SportsDome on comedy central

you're that person at a conference who stands up to ask a question and then breaks out a notepad with like 10 questions and three statements on it aren't you? :)

it's increasing! and that's mostly cool and occasionally awkward / embarrassing. on the plus side, i was recognized in London last week just walking down the street. dude was like, "I follow you on Twitter," and I responded, "Great, please let's keep the following part to the online realm."

Where it's odd are times I forget that I CAN be recognized, and I'll see a tweet in which someone says something like "just spotted baratunde. he ordered a latte." I'm like YO, JUST SAY HELLO TO MY FACE AREA!

i think the market we see doesn't fully reflect the range of styles and ideas out there. for decades, "black comedy" was promoted as a very specific kind of voice, style, etc.

so on the whole, i'm not sure i buy that "black comics" are more into situational than satire any more than other comics are. i have no pure data! :)

it's also possible that the situations described by many black comics may meet the threshold of absurdity more easily than that of other people and thus gets closer to the realm of satire on its own, but that's just me making things up now

i'm only doing this IAmA because I'm black.

great question. i'm taking a pause and want to give you the depth of response you deserve. gotta eat some lunch though cause i forgot breakfast! thanks all BRB