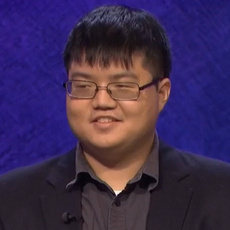 I am Arthur Chu, #3 winningest Jeopardy contestant in regular-season play in history, with 11 straight victories and total cash winnings of $298,200. Ask me anything.

Wow, I'm really impressed now that I know I beat a PhD! (Okay, actually I knew Julie was a PhD, but I'm getting a hunch you're not her.)

I guess you could say that trying to keep up a fast momentum and being hyperfocused on the game was a "strategy", but it wasn't really a conscious strategy to intimidate people. I think when I said that the game is "about intimidation" a lot of my critics took that to mean I was a dick, like I walked into the green room, folded my arms and spat "Buncha lousy maggots" at all y'all.

In reality the main thing was that I knew that lots of Jeopardy contestants are smart but it's their emotions that make them lose. And I was really really intent on not letting my emotions get to me -- in the end I was unsuccessful and went "on tilt" once I started having a bad day, leading to my loss, but it was being a "robot" onstage that kept me from freaking out and kept me focused enough to still pull out victories even after taking big losses.

I certainly didn't want to be rude or mean to anyone, purposely. But I've always been kind of a withdrawn person (some people might say "inscrutable") and one of those people where it's hard to get to know the "real me". My wife's commented on it, how people who know me in different contexts have completely different views of my personality -- my coworkers at the office tend to think it's a miracle if I speak more than ten words in one day while people I do improv or stand-up comedy with think I'm the biggest loudmouth asshole they've ever met.

As far as not spilling the beans, there certainly were moments where I felt like I wanted to jump up and brag about it. But I'm also the type who enjoys keeping secrets, especially when the secret is something awesome -- I actively enjoyed dropping hints that I really wanted people to watch my episode and "support" me so that they'd think I lost my first game. I had one of my friends say "If anyone doubted Arthur has skill as an actor they should see how embarrassed he was about asking me to watch his first Jeopardy game".

Anyway, best of luck to you -- I don't know who you are but everyone I played against was good people, and with a name like FartPoopRobot you don't need Jeopardy to take you far in life.

That's a pretty serious accusation and ever since the old quiz show scandals (like in the movie Quiz Show) rigging a quiz show is actually a federal crime you can go to jail for, so I wish people would stop bringing that up like it's no big deal.

For the record, Alex Trebek doesn't actually make any judgment calls. The judges at the judges' table do, and the judges are sitting with Karen Love, who's a "contestant advocate" who doesn't work for Jeopardy but for an independent compliance firm that audits Jeopardy (kind of like Price-Waterhouse-Cooper for game shows). It's her job to take our side should there be any accusation of unfairness -- Standards & Practices takes this stuff very seriously.

So no, I have no serious theories that I was somehow "pushed off" the show. Things like whether Alex hesitated too long to correct Diana on "peptide ulcer" are purely subjective judgment calls -- it's always been the rule that if you correct yourself before Alex says anything Alex has to take your second answer, and how long Alex hesitates before ruling you wrong is a matter of him being a human being and trying to make a good show. (You'd all hate him if he instantly jumped on you saying "WRONG" as soon as we said anything.)

Not very. Watson is a machine programmed to beat people at Jeopardy. Ken Jennings and Brad Rutter were coming into it with way more experience and natural buzzer mojo/knowledge base than me and got smoked.

I don't think it's something to be ashamed of. The point of machines is that they do things better than any human can. I also can't run faster than a Ferrari, bench-press more than a hydraulic lift and if you fill me with hot water and coffee grounds the beverage that comes out tastes awful.

If I ever do write something it'll probably be more addressed at the social-media backlash and the backlash-to-the-backlash and the whole weird phenomenon of being a media "villain", which to me is the much more unique part of the story.

It didn't help that after a month of studying for Jeopardy I had reached my peak lifetime weight (no gym, no walking, just studying all the time) right before going on national TV. I think you can tell from looking at my interviews now that I've dropped about 20 pounds already from that peak.

Oh, one random thing is when we were walking around on our tour of the set I wandered away from the other contestants and reached out to touch the metal scaffolding of the Jeopardy set to confirm it was real. I got a powerful static shock for doing so. Decided to take that as a positive omen.

It didn't end up helping that much, but you do what you have to do. For the first and only time in my life I paid for airplane wi-fi on my first flight to LA because I felt like I still wasn't "done" studying and didn't want to waste any time.

If you really honestly irrevocably spill them? Probably forfeiting your entire prize (which you don't get until your whole run on the show is over).

Usually what happens is people accidentally spill the beans, the producers give them a stern talking-to and they take down the offending tweet/FB post/whatever. But the stakes are a lot higher when you're me and legitimate news organizations actually consider your success newsworthy.

That's really between me and my wife. A gentleman never tells. Though it's never a bad thing to come home to your wife and tell her you just made $100,000 for one day of work.

I think I probably suffer from Resting Asshole Face, the gender-swapped variant of the more well-known ailment Resting Bitch Face.

No discernible smell. And there's certainly tension, in general and specifically toward me once I started winning a lot and everyone started seeing me as the primary reason their dreams of winning big on Jeopardy would crash and burn -- no one was anything but nice to me but obviously you could sense that that tension was there.

But I was surprised by how nice everyone ended up being. After Padraic lost to me he actually went up to me and gave me a note with a list of tips for where to find improv training and groups in the Midwest after he'd heard I did improv, because that's what he makes a living doing -- a really nice gesture he didn't have to make. And I mentioned how Diana came up to me at the end of a taping day and said that it was an honor to be playing against me, no matter what happened -- which definitely softened the blow when she destroyed me the next day.

And I may take you up on such an invitation sometime but unfortunately I'm going to be on my way to get on a plane back to Ohio tomorrow at noon (assuming you mean noon Eastern Time).

I understand why Alex says it but it kind of bugged me that he went out of his way to say I had a week to study during the 90s Tournament when I had no such thing.

Diana didn't watch me on TV -- she was the alternate for the Nov. 19th taping (my week of games from Feb. 24th to 28th) so she watched all those games before going back to the hotel and coming back for the next taping date. That's a privileged position to hold -- Julie Singer did something similar before beating CHip Bell in the game just before I beat her.

Don't let anyone force you to conform to their fashion "rules". Wear that shit with yoga pants.