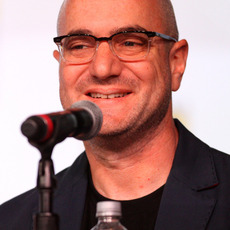 About
Andy Bobrow is an American television writer and producer whose past work includes "Malcolm in the Middle", "Samantha Who", and "Sons of Tucson". He started working as a producer on "Community" in Season Two and would later write several episodes.
Reddit AMA Stats
Tag Cloud
community

We are the writing staff of NBC's COMMUNITY, AMA

Megan will have a better answer. The idea of multiple timelines had been talked about from time to time. I remember Hilary Winston and I were really obsessed with trying to do a Sliding Doors kind of episode, where everything changes based on whether Annie gets a good parking spot or not. We still may try to tackle that one.

But in between seasons 2 and 3, Dan had some kind of drunk brainstorm, which I believe he texted to Megan. Basically it hit him that you could use some kind of simple mechanism, like a game night, and explore different realities based on which character wasn't in the room. Dan, Megan and McKenna I think were the driving forces in breaking that story from there. They are Gods in my book.

Very. I'll spoil a teeny bit, but nothing that actually ended up in the episode. Early on, we had this vision, a really heartfelt tearjerking montage that we knew we wanted to do if it was the season ender. A kind of flash-forward, but way more than that. It was going to make you all cry rivers of tears. And we wrote a version of it. Then, two things happened. One, we realized that to do it right it would take like five whole minutes, which we really couldn't spare. And two, NBC just didn't want to do a final FINAL montage because what if there's a Season 5? It's a weird moment as a writer when you find yourself wanting to do an ending but being told, well this might not be the ending.

Anyway, point being, we did not end up doing that tearjerker montage. But we did do a kickass finale. One that could be a very satisfying end to the whole journey, but one that also could just be the end of another year at Greendale. You'll see.

There's an episode this season that I believe I am most proud of. WEll, tentatively. It depends on how it's received. I wrote some very popular high concept eps in seasons 2 and 3 (Space Bus, Troy's Birthday, Pillows and Blankets) but all of them were heavily guided by Dan. So while I'm proud of them, I went into this season challenging myself to come up with a "special" episode and see if I could pull one off without my mentor. I am very proud of this season's Christmas episode because of that. It is a bottle episode and borrows heavily from Hitchcock. It's a one-act play and I am very proud of that one. Basically because I took everything that Dan Harmon taught me, everything I learned from Community, and I worked really hard to apply it.

I'm single-parenting tonight so I need a few minutes to get situated (ie get my daughter set up with a Little House on the Prairie episode). I will jump in when I can.

I'll answer the May 23rd thing because we don't want to build up expectations. Unfortunately, when we wrote and shot this batch of episodes, we believed we would be airing from October through January. So we never even thought to plan a May 23rd thing. Then, when we were postponed, we didn't know when we would start airing, so even if we wanted to do a May 23rd thing, we wouldn't know which episode to put it in.

So unfortunately, there's no May 23rd shout-out. We will have to explain it away next season if there is one.

I'm loving this shit. I'm a total whore for this. I absolutely love it.

Yes. We didn't think it would be hard. We didn't think our goals for the season were that sweeping or ambitious. We wanted to explore Troy and Britta together, and we wanted to do this thing with Chang involving his "Changnesia" and eventual rehabilitation. But even those two simple things, the end of the season snuck up on us. We found ourselves scrambling to tell those stories and we had to cram some stuff in, probably poorly, towards the end.

I listen regularly. Hearing Dan, drunk, spewing his brilliant anger, it's basically a snapshot of what the writers room was like during Season 3. Except it would go on for hours and hours, no end in sight. All day, all night. And he would pass out a lot.

Hi guys. Love your work. Have you ever considered giving Andy Bobrow more money? And as a follow-up, why not?

That's a really good question. I'm tempted to say Maggie Bandur? But not completely sure.