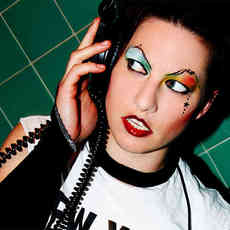 no lie: he keeps them in plastic tubs and actually does differentiate between which ones are spanky new and which have been washed A LOT and are now off-black.

this is a good question.

first off: neither neil nor were strangers to haters when we met each other. from the first outing of the dresden dolls in 2000 (my first band, which was just me and one other guy) in boston, i was confronted with the amazing phenomenon that is People Who Love To Spend Their Time Hating & Criticizing Artists. back in 2003 when the dresden dolls built a proper website, i even made sure our designer put in a section called "hate mail". and this was pre-social network, pre-myspace. these were just plain old hate letters, via email. that site is still up, and the hate mail section lives on!!!: http://www.dresdendolls.com/hatemail.html

there was even, back in the heyday of livejournal, an entire community was dedicated to hating my band.

neil can chime in about his own pre-marrying-amanda-palmer experiences, but he certainly had his own field of trolls and neil-gaiman-haters before i showed up.

so it came as no surprise to both of us that our union ushered in a whole new exciting era of hatred for the trolls and critics.

on the upside, coping with it when you have a partner who TOTALLY UNDERSTANDS how it feels to read a load of bullshit comments is WAY easier, and i think it's one of the big reasons neil and i are and were attracted to each other. our job is weird. we're constantly in the public trying to communicate and make art and it's impossible to do that nowadays without facing haters and trolls....and it can feel really lonely.

we also serve to edit one another. both of us try to protect each other from taking troll-bait. we've traded "DELETE THAT TWEET YOU'LL ONLY ENCOURAGE THEM" emails and phone calls with one another more than once. it's nice to feel like we're part of an engine room that way....we protect and help each other.

i WAS a bit shocked when i realized that there was a whole subculture of WOMEN who were basically grumbling "fuck that bitch amanda palmer for dating/marrying my favorite author. now i can't like either of them". it seemed to me emblematic of the entire problem with feminism...a bunch of women scratching their own (and each other's) eyeballs out because they've been fed the cultural lie that there's only one place at the table for a single power, instead of understanding that the more we support and encourage each other as women, the more powerful and happy we can be on this fucking planet.

and the truth is...it's just part of the job. i have accepted that doing this job (especially as a woman, which generally means i'm more of a target) means that "learning to deal with the trolls" is part of my everyday to-do list. you get good at it.

and honestly....the more i do it and learn about this part of the universe, the more i approach the haters and yellers with compassion. the more i look, the more hurt i see, and the less i feel like yelling back. from where i'm standing, the ones screaming the loudest probably need the biggest hugs.

glad to be of service. hopefully you saw the longer thread answering this...

for the record, i actually know quite a few people (artists and otherwise) who are in open relationships, but don't go around broadcasting it. neither do we. i don't really hang with the poly community or go on "open marriage" pride marches. that being said, there aren't a lot of people trying to oppress our way of doing things, not actively, at least. if people showed up with pitchforks on my lawn (and my friends' lawns) regularly, doing some parades might start to look more tasty.

we tend to use bed as our space to talk about our actual relationship and our sex life...we don't do that shit over dinner. it's the place where we can hold each other, be safe, away from work, phones and other people and let all of our feelings out.

we've recently been apart for about a month until a few days ago and this morning we'd planned to get up at 8:15 am and go to a yoga class and lunch together before hitting this reddit at 1 pm. instead, we woke up at 8 and had sex and airings-out and arguments and makings-out and generally caught up about all of our feelings and shit (it's been a month, after all) until noon. when we've been apart for a while, that tends to be necessary when we get back together. and we prioritize it.

and we both grind our teeth, so we both use night guards. it's really un-sexy and therefore sexy as hell.

it's true. i was also in a relationship at the time with no interest in falling in love with neil gaiman...and i barely knew his work. we've looked back at the photos from that day and had a good laugh. neil looks like hell and has a black eye (his dog gave it to him.....long story) and i looked (according to neil) pudgy and mannish and absolutely "not his type". nor was he mine.

the reason we're convinced this relationship has legs is that we fell in love with each other's personalities and brains and then, later, with each others bodies and faces....from a deeper place.

both neil and i wanted to be in an open relationship from the word go, and it was one of the fundamental building blocks of our life together. it may change - but for now, it works for us. i'd had many friends in open relationships and i've seen it work, and i always felt very stuck and wrong in monogamous relationships...and usually felt like the selfish asshole for wanting to be able to sleep with random people/lovers/friends. so when neil and i discovered we were on the same page about that, it was, i think, one of the things that attracted us to each other.

how to make it work well is a lonnnnng conversation, but i can summarize: you have to communicate, heavily. this is why i think open relationships are often, if done right, healthier in some way than closed ones where there's a lot of secrets, fear and jealously that could be avoided. we have our general guidelines (don't sleep with this ex! don't sleep with truly crazy and psychically dangerous people! etc) but the one fundamental guideline is that we tell each other EVERYHING, there's no hiding. if we sleep with someone, we disclose it, and we do it kindly and in a way that won't be harmful, and then we fill in as many details as the other person wants.

it works for us. but that being said: everybody's really different. and things change. i've known a few couples to go from closed to open, and from open to closed, because that's what their marriages needed. like so many other things in my life:

whatever works in the moment. and don't forget, the moment changes.